Author and journalist Matti Friedman is proving a trailblazer when it comes to writing about Israel's Middle Eastern culture. Here in the New York Times he writes about Nisreen Kadra, an Arab-Israeli convert to Judaism, now the diva of the Mizrahi music scene:

At 17 she was spotted by a few Moroccan Jewish musicians playing Arabic music at the home of a friend, an Arab girl from Nazareth. After that she spent years working in bars, singing the classics of the Egyptian diva Oum Kalthoum, fending off aggressive and drunk men. 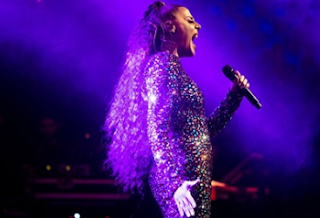 “It was a tough world, but that’s where I learned,” she said. She had no other musical education. She lived at home in those years, helping her diabetic mother and cleaning houses to supplement what her father made driving a cab. In the evenings she’d wait for the band to pull up and honk.

“I’d come home from work, shower, get up on high heels, put on jewelry, red lipstick, my huge fur coat and go to the clubs to sing,” she said. This was a questionable pursuit for a Muslim girl. “My mother didn’t want to let me, because what will the neighbors say, the relatives,” she remembered.

But the family needed the money, and that settled it. Winning the TV song contest in 2012 propelled her from the bars onto the bottom rungs of the mizrahi pop scene. She had a hit with the single “Learning to Walk” in Hebrew and a string of others like “Albi Ma’ak,” Arabic for “My Heart Is With You,” which blended both languages in a way that seemed completely natural.

Her Hebrew, which she says she picked up in earnest only after high school, improved with coaching, and her look was modified by the glam technicians. But her style remained that of the grand divas of Lebanon and Egypt, like Oum Kalthoum, about whom it’s said that she’d wear boys’ clothes to sneak into the mosque with her brothers to escape the strictures of her Egyptian childhood and unleash her female voice.

More from Matti Friedman
Posted by bataween at Thursday, February 27, 2020