Some 180 Jews from Israel, the UK, France, the US and elsewhere descended on Alexandria's Eliyahu Hanavi synagogue to mark its re-opening after a three-year programme of restoration paid for by the Egyptian government. The visitors held a shabbat service, prayed in the cemeteries and lit candles in memory of their dead. But silence will return to the synagogue after the Jewish guests go home -  the Jewish community in Egypt itself is on the verge on extinction. Report in the Times of Israel:

CAIRO — This weekend marks the largest Jewish prayer gathering in Egypt for decades. From across the Diaspora, some 180 Jews of Egyptian origin have flown to the land of their fathers for a Shabbat dedicated to marking the newly restored 14th-century Eliyahu Hanavi synagogue in Alexandria. 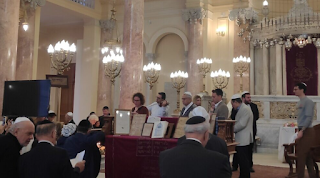 The weekend was closed to media and organized in part by the Nebi Daniel Association, an organization that works to preserve Jewish sites in Egypt. Only four or five septuagenarian and octogenarian Jews currently reside in Alexandria, Nebi Daniel Association board member Alec Nacamuli told The Times of Israel.

The city used to house 12 synagogues, but most of them were sold over the years to support the Jewish community there, and its infrastructure and institutions, he said. Once the largest in the Arab world, the Eliyahu Hanavi synagogue was recently reopened in a festive gathering of government officials and Egyptian Jews on January 10.

In cooperation with the military, Egypt’s antiquities ministry oversaw the 64 million Egyptian pound ($4 million) renovation which lasted over three years after the roof and staircase collapsed in 2016.

When Egypt decided to restore a beautiful synagogue (Andrew Baker)

Thank you. I have been very interested in the architecture and internal facilities of the Alexandria Synagogue, but was waiting until the formal opening. I will publish my post this week and create a link to your post.