Tunisia's Jewish minister of Tourism, Rene Trabelsi, will be leaving his post in a reshuffle announced by the prime minister last week. He will be replaced by Mohamed Ali Toumi.

Trabelsi, hitherto the Arab world's only Jewish minister, with an important stake in tourism on the island of Djerba,  will have served  in the Tunisian government just fifteen months. His appointment in November 2018 ignited a storm of controversy over his links with Israel, which he has visited several times.

But the nail in the coffin of his ministerial career was likely to have been the landslide election in September of Kais Saied, Tunisia's new president, a hardline opponent of 'normalisation' with Israel.

According to the Times of Israel, the president called moves towards relations with the Jewish state 'high treason'. The Tunisian parliament was due to vote last year on a draft law criminalizing ties with Jerusalem, but the proposal did not get the endorsement of then-president Caid Essebsi, who died in July.

During the debate, Saied said Tunisia was in a state of war with the Jewish state. Saied seemed to express tolerance of Jews, saying that Jewish people with no Israeli passport were welcome to visit the country’s synagogues. But he rejected “dealings with Zionists,” whom he accused of displacing  Palestinians'. Hundreds of Israelis, many of them of Tunisian origin, traditionally visit the country’s Ghriba Synagogue for an annual pilgrimage during the Lag Ba’Omer holiday.

Trabelsi had declared that lack of normalisation did not imply that Israelis did not have a right to visit. 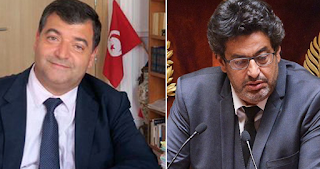 In early February, however, Meyer Habib, who represents French Jews living in Israel in the French parliament and is himself of Tunisian origin, called on his Facebook page for a boycott of Tunisia which he claimed was descending into 'Iranian-style hatred' after it questioned the participation of a 17-year-old French-Israeli player in a tennis tournament. Although Habib took down his post, he and Trabelsi had a heated exchange.