From persecution to freedom: one Iranian-Jewish family's story (updated)

Every Jewish refugee has his or her story, but many are still untold, or kept within the confines of the family. Kam Aynessazian 's story might have remained unknown had he not heard of Point of No Return.Thanks to Kam for sharing  his family's story with Point of No Return readers. 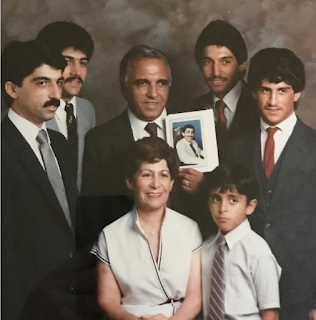 A family photo taken in Chicago in 1986. From left to right: Kamran, Kambiz, father Masoud holding a picture of Kamyar, Kam(bod), Kayhan. In the foreground, mother Ezzat and Kayvon.

Kam's uncle (his father's younger brother) was the first to emigrate  to the US in 1956 aged 20 with about $100 in his pocket. He ultimately established himself in Chicago and through the years helped all his younger siblings  to move to the US. Those who left Iran at that time  sought economic opportunities and higher education - denied to them in Iran - mostly due  to their religious minority status (a Jew's birth certificate invited discrimination by including the word Kalimee, meaning Jew, next to the person's name).

Life under the Shah was, in retrospect, a golden age for all sectors of society. Minorities were able to practise in freedom and without fear. Kam's family (his parents and six sons)  enjoyed a middle class lifestyle. But 'sudden' westernisation was producing a backlash from conservative Islamic fundamentalists, culminating in the Islamic Revolution.

Kam's oldest brother (22) had already come to the US in 1976 to pursue his higher education. Then in 1978, Kam's parents, anticipating the revolution and potentially dire consequences for minorities, managed to get two-month visitor's permits  for themselves and for their two middle sons (the third son was aged 14 and the fourth, Kam, aged 13) to the US, leaving behind the fifth (aged 10) and 6th son (aged 2) with relatives.

The parents returned to Iran while Kam and his brother stayed on - illegally - in the US. The Islamic Revolution broke out in November 1978, unleashing vicious religious persecution. Kam's second oldest brother (aged 18) was flown to Israel by an organisation rescuing many young adults. Distant Baha'i' relatives of Kam, who refused to convert to Islam,  were executed. Jews and other minorities - never popular - were forced to live in seclusion and practise in private. Many lost contact with their families abroad.

Kam's parents and the two younger brothers were stuck in Iran. In the meantime Kam's uncle was able to apply for and get immigration visas for them, but since the US Embassy was closed, they were unable to obtain them. Nor were they allowed to  travel to another country with a US embassy to receive them.

Kam's father was desperate and in 1983, he paid smugglers a hefty bribe to take his wife and two  sons over the border into Pakistan (he stayed behind so as not to raise suspicion). They endured many hardships along the way, but eventually made it. They joined a group which had access to forged documents and visas. His mother and brothers ended up in Spain. Through Kam's uncle,  they managed to obtain legal visas from the US embassy in Spain.

Back in Iran, Kam's father, a textile merchant, was trying to liquidate some of his personal assets while not giving the impression that he was preparing to leave. Most of his assets were left behind: the business, a shop, car and land.

Eventually, he tried to escape, but was captured and thrown into jail, with death as a certain punishment, in the border city near Pakistan. Thankfully, he had business contacts in that town who were able to vouch that he was there on business. He was then released.

In 1985, Kam's father tried again to escape to Pakistan, this time successfully, and was re-united with his family in Chicago. Kam had not seen him for seven years.

Against popular wisdom, Kam's parents (legal US citizens) went back to Iran in 2006, to visit family and friends. It turned out to be a grave mistake. Upon arrival, their US passports were confiscated. Kam's dad fell ill immediately. He ended up in hospital and died soon afterwards. Kam's mother was able to retrieve her US passport after a few weeks of court proceedings and immediately returned to the US. It took another few weeks of legal wrangling for the body of Kam's father to be sent back to the US.

Kam's mum and five of the six brothers currently live in the US. One brother still lives in Israel. Kam's mother has ten grandchildren, and so far, seven great-grandchildren.

Email ThisBlogThis!Share to TwitterShare to FacebookShare to Pinterest
Labels: Iranian Jews in US, Jews of Iran, Testimonies