Five Jewish writers united by their attachment to Egypt

A new book, On the Mediterranean and the Nile (Indiana Press, 2018)  by an Egyptian-born Jew, Aimee Israel-Pelletier,  pays homage to the considerable literary contribution in French  made by five Jewish refugees from Egypt.

The title of this book, part of the Indiana Series in Sephardi and Mizrahi Studies, is something of a misnomer. This is not another ‘story of the Jews of Egypt’ as we have seen several in recent years. Nor is it a family memoir of someone born in and exiled from Egypt. It is a series of analyses, profound and reaching across disciplines, yet well-rooted in its own field, of the work of five key fiction writers from the last two generations of Egyptian Jews.

The author is a professor of French, author of a study of Rimbaud’s poetics, and thus brings literary tools to a group of novelists who express the deep-felt anguish of the uprooted Jews of Egypt: not as in biblical times exiting with song and gratitude to God, but expelled unwillingly from the land that they deeply identified with, even loved.

Extract of review by Deborah A. Starr of Cornell University in AJS Reviews 43 (2018): 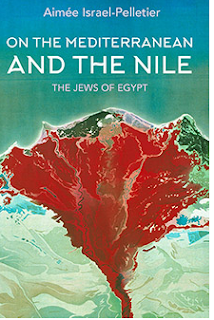 In recent years, there has been an encouraging increase in publications about the modern history and cultural production of Sephardic and Mizrahi Jews. Aimée Israel-Pelletier’s new book On the Mediterranean and the Nile: The Jews of Egypt provides a much-needed addition to this burgeoning field.

Israel-Pelletier examines writings—poetry, prose, and essays—by five authors who were raised in the Francophone culture of the Egyptian Jewish bourgeoisie and elites: (Jacques Book Reviews 492 Downloaded from https://doi.org/10.1017/S0364009419000795 https://www.cambridge.org/core. UT Arlington, on 06 Nov 2019 at 01:06:59, subject to the Cambridge Core terms of use, available at https://www.cambridge.org/core/terms.)

Hassoun, Jacqueline Kahanoff, Edmond Jabès, Paula Jacques, and André Aciman. The works Israel-Pelletier discusses were all composed following the writers’ departures from Egypt and the dispersal of the Egyptian Jewish community in the mid-twentieth century. To date, little serious scholarly attention had been paid to the literature produced by Francophone Egyptian Jews as a unique corpus. Egyptian Jewish literature does not fit comfortably in the postcolonial paradigm of Francophone studies, dominated as it is by the Caribbean, North Africa, and sub-Saharan Africa.

Further confounding classification, two of the writers—Kahanoff and Aciman—ultimately made careers writing in English. In the context of Jewish studies, paradoxically, while French served as the lingua franca of middle- and upper-class Egyptian Jews (and other foreign minorities, as well as the Egyptian elites), little scholarship has been published in English about the Francophone literary production of Egyptian Jews. Israel-Pelletier’s book fills this gap. 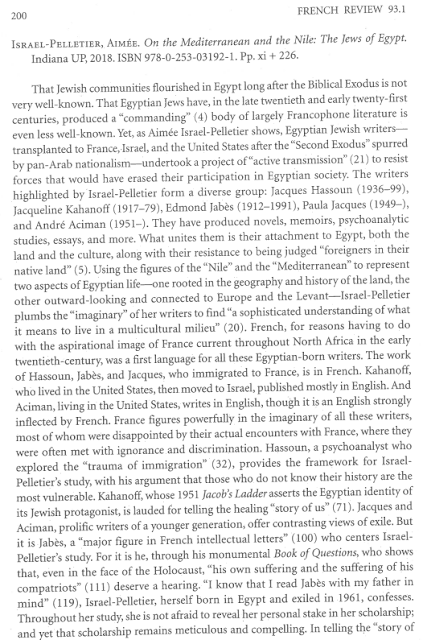 us', she elucidates the relevance of Egyptian-Jewish letters to all Jewish, French and contemporary literary and cultural studies.
Posted by bataween at Thursday, February 20, 2020

Email ThisBlogThis!Share to TwitterShare to FacebookShare to Pinterest
Labels: Books, Jews of Egypt