Restoration of synagogues is seemingly the new normal  in the Arab world. For all the hype that these preserved sites are silent witnesses to a shared Jewish and Muslim heritage, they will never be more than monuments to the ethnic cleansing of Jewish communities.  Seth Frantzman writes in the Jerusalem Post:


Throughout Middle Eastern countries where Jews were once prosperous, numerous Jewish sites are getting a makeover and Jewish history being remembered. It is a major change from the past decades when Jewish history in many Muslim countries was sidelined, or even purposely erased.

Recent stories from Morocco, Egypt, Lebanon, Afghanistan and northern Iraq paint a surprisingly bright picture. In northern Iraq, US diplomatic staff visited the tomb of the Prophet Nahum in the town of Al-Qosh.

Ambassador Matthew Tueller attended with Acting US Consul Elisabeth Rosenstock-Siller. Tueller and Rosenstock-Siller saw the restoration work at Nahum’s tomb and the US Consulate in Erbil in the Kurdistan autonomous region tweeted that the site is “rich in cultural importance to region’s Jews, Christians and Muslims."

The US has contributed $1 million to fund this project, help safeguard history and attract tourists.

In Herat, Afghanistan an effort to restore some synagogues has taken place, according to an article in  Al-Jazeera. Most Jews fled Afghanistan and only synagogues remained in some places. In Herat there were six. They were neglected during Taliban rule in the 1990s. According to the report, some efforts were made after 2001 to restore the structures. “Of the six synagogues, one was given to be as a school, another was given to be turned into a mosque and four that were badly damaged were set to be restored,” a caretaker of heritage sites told the reporter. 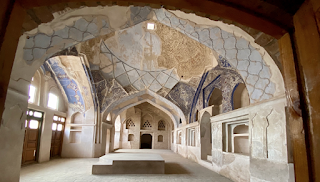 “About 10 Afghan artists and architects worked on it for over a year,” the report notes, regarding the Yu Aw compound that included Jewish sites. The Aga Khan Foundation also provided collaboration with the tourism authorities in Herat. The restoration work has contributed to the skills of young professionals.

In the Moroccan city of Essaouira, a new House of Memory of Bayt Dakira has been opened by King Mohammed, who visited it last month. More than $1.5 million was spent on the site, according to reports.

Arab News notes that “Bayt Dakira is part of a wider effort to restore the country’s Jewish legacy. This has included the renovation of a dozen synagogues, 167 cemeteries and 12,600 graves.”

Weeks after the ceremony in Essaouira, the Eliyahu Hanavi synagogue in Alexandria, Egypt also held an event commemorating its restoration. “The house of worship was recently reopened in a festive ceremony after a long period of restoration,” Deutsche Welle reported.

The project took just over two years and around $6 million was  invested by the Egyptian government. The synagogue has space for 700 worshipers and has other important elements. The site dates to the 14th century but was rebuilt in 1850 after being damaged. The government has also helped secure and invest in sites in Cairo, such as the Ben Ezra synagogue in Fustat. Magda Haroun, leader of Cairo’s small Jewish community has praised the efforts.Arab countries are looking back more fondly on their Jewish heritage.

A report at the Begin-Sadat Center for Strategic Studies notes that funds were raised in Lebanon to restore the Maghen Abraham synagogue. A video by the World Jewish Congress notes the project took a decade with private funds from 2009 to 2019. The synagogue in downtown Beirut has now been fully restored.

The news from Iraq, Egypt, Morocco, Afghanistan is part of larger context of recognition and investment in Jewish sites and heritage across the Middle East and neighboring countries in South Asia. 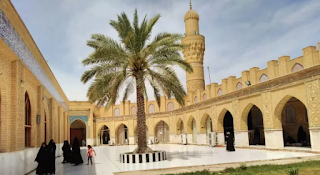 The shrine of Ezekiel, now rebuilt as a Shia shrine (photo: Judith Neurink)


An article by Judith Neurink in Haaretz claimng  that the shrine of Ezekiel in al-Kifl, Iraq, will be opened to visitors  seems to be based on wishful thinking.The authorities plan to open up a separate entrance leading directly into the shirne from the Daniel market, says her guide Ahmed Abdelrahman. But Ms Neurink only has Abdelrahman's word for this. She herself admits that the burial chamber, with its Hebrew inscriptions, needs restoration, but after the site's makeover as a Shi'ite shrine, the authorities seem reluctant to make the necessary investment.

Of course I wish this is a sincere change of heart. But I also understand:

1. The long-game mentality of Islam’s desire for conquest

2. Their penchant to lie to fool the infidels – including those most hated infidels of all, Jews

So while I’m hopeful, call me cynical in opining that this is – in reality – a long-term disinformation campaign, likely decades long, to lure Jews and Israel into complacency. That, and get tourist money.