The re-opening of the Eliyahu Hanavi synagogue in Alexandria demonstrates that Egypt is sending mixed signals to its former Jewish citizens: on the one hand it wants to revive the Jewish community, on the other hand Jews cannot practise openly (as in Morocco) and must be protected against real threats by strict security at al times. Insightful article in the Economist (with thanks: Alec):

When it comes to Egypt’s Jewish community, President Abdel-Fattah al-Sisi says all the right things. Only a minuscule fraction of the 80,000 Jews who once lived in Egypt remain in this Arab, Muslim country. 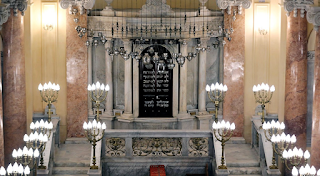 Nonetheless, Mr Sisi promises a resurgence of local Jewry. He has invited back Jews who were pushed out after Israel’s invasion in 1956. He has listed dilapidated Jewish cemeteries as heritage sites and spent millions of dollars restoring what was once the world’s largest synagogue, Eliyahu HaNavi, in Alexandria.

On February 14th about 180 Jews of Alexandrian origin returned to rededicate the synagogue. They hammered a mezuzah onto its walls, danced with the Torah scrolls and sang psalms to the tune of “Inta Omri”, the anthem of Egypt’s most famous diva, Umm Kulthum.

The service that followed was the largest in the synagogue for 60 years. The men promised to return a year later for a wedding—the first step to rebuilding a community which a century ago attracted more Jews than Palestine.