Following the release of the Trump Peace Plan, the British Government minister for the Middle East, the Rt Hon Andrew Murrison MP, has underlined the importance of recognising the rights of Jewish refugees from Arab lands.

Speaking in the House of Commons at Westminster on 30 January 2019, the minister was responding to a question from Robert Halfon MP, whose family had been expelled from Libya.

He said that Jews were also refugees, as explained in the book UPROOTED which he described as explaining the issue 'exceptionally well'. The Trump Peace Plan is the first to detail the issue of the
Jewish refugees explicitly. 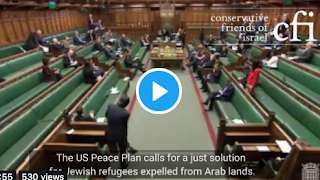