Following the assassination of Qassem Suleimani, senior commander in the Iranian Revolutionary Guard corps, the Los Angeles Times has been canvassing opinion among Iranian Jews in California: 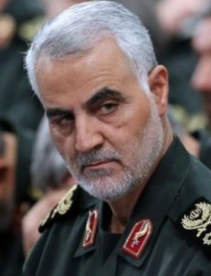 Some who were doing their pre-Shabbat shopping in Pico-Robertson described Suleimani as an enemy of Israel, which has been locked with Iran and Saudi Arabia in a struggle for regional dominance.

“The concern is about effects that will happen around the region, but I don’t think the U.S. could [just] stand there,” said the man, who fled Iran with his family during the Islamic Revolution and did not want to be identified.

“I think Trump needed to make a stand in some way.”

Tabby Refael, an Iranian refugee and a prominent voice in L.A.'s Persian Jewish community, said “the first ones to breathe a sigh of relief were the Persian Jews, because Suleimani was not only an enemy of the Iranian people, he was an enemy of the Jewish people.”

She and others in the Persian Jewish community said their most immediate concern was for family in Israel rather than about any direct retaliation against the U.S.

In a vacuum, objectively, his death is a welcome development,” said Sam Yebri, president and co-founder of 30 Years After, an Iranian American Jewish civic organization in Los Angeles. “With that said, most Iranian Americans, including myself and my family, are fearful of the repercussions. This is a really dire situation if it escalates."

Read article in full
Posted by bataween at Monday, January 06, 2020