Revisited: the Nahum Palace, where a Jewish leader was murdered

Lucky Nahum is a US-based fashion designer and businessman, born in Tripoli. Recently his friend Giuseppe Scalora sent him a video of the Nahum family residence in Libya, the Nahum Palace. The family owned several properties and land in the Tripoli area. When it was forced to leave Libya the family received not a cent in compensation. The Palace was also the site of the murder of its owner, the prominent leader and businessman  Halfalla Nahum.

Thanking Giuseppe for the video clip, Lucky wrote this post on his Facebook page: "Much has changed in 53 years since our expulsion, but here's the palace today (it shows up at the 1:12 mark of the video). I think one can appreciate the size of it and what it might have been in its glory days, it appears to to have taken Giuseppe until the 3.04 mark to have walked the length of it.

This street is now called Sciara Ysticlal, and at the time Corso Vittorio was THE street. This was where all the better jewellers were, the better stores in general. Here people strolled to meet other friends, to see and be seen in their finest clothing. "

The video shows a glimpse of a side street and the public gardens in Tripoli. These took up the entire width of the back of the Palace. The Palace faced the Corso Vittorio on one side and the Mediterranean just beyond the gardens on the other. 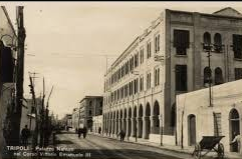 Postcard of the Nahum Palace in its heyday 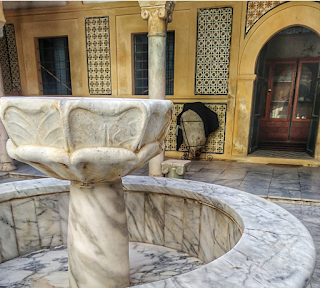 Another property owned by the Nahum family in Trupoli

An eighty-four-year-old Jewish leader, Halfalla Nahum, Lucky's uncle, was murdered at the entrance to Nahum Palace in 1963. A lay leader and well-to-do businessman. Halfalla was the highly respected president of the community.  He worked with the Italian authorities before WWII to improve the lot of the great mass of Libyan Jews, who were poor. He was assaulted in 1920s by Fascists.

Before his murder Halfalla was first threatened with letters allegedly asking for protection money and when he refused to pay the second demand, the murderers came to his home, tied him to a chair and killed him. The police initially suspected 20 Jews because Halfalla was a generous donor to Arab philanthropic causes. The suspects included Rabbi Baruch, a shohet. He was held because of blood stains on his shirt.

A gang was finally arrested consisting of ten Arabs and one Maltese, although the family still have their suspicions that these were not the actual perpetrators.

During the summer of that year, a time of rising nationalism, other Jewish figures were attacked and injured, including Beniamino Haddad, who lost one eye.

Today, there are no Jews living in this 2,000-year-old community.