'Only three Jews show up' to inauguration of Nebi Daniel synagogue

To much fanfare, the Eliyahu Hanavi (Nebi Daniel) synagogue in Alexandria was at last officially inaugurated after a three-year programme of restoration, ordered by Egyptian president Al-Sissi. While the project affirms that Jews once lived in Egypt and their glorious heritage, The Jerusalem Post noted the irony that 'only three Jews showed up'. Meanwhile, Egypt continues the creeping appropriation of the near-extinct community's moveable heritage, Torah scrolls and communal records. 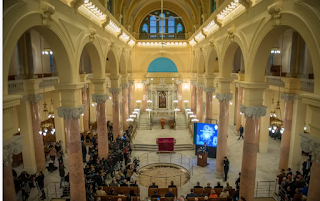 At the age of 67, Haroun is the youngest of the eight remaining Egyptian Jews. “I will be the last Jewish woman in Egypt to close the door of the synagogue,” she said.

Yolande Mizrahi, in her 80s but still vital,  sat in one of the rebuilt wooden benches of the synagogue. Although her family left Egypt for France, Italy and Israel, she remained and reveled in returning to the synagogue which she attended as a child.

“I have traveled a lot and I have always returned. This is my country, I belong here. Why should I leave? asked Mizrahi, adding that she hopes her family will visit to see the refurbished shul.

“Egyptian officials are hoping that the synagogue will become a tourist attraction that backs up Sisi’s assertion that the country respects religious minorities and their heritage.

"If it wasn’t for [President Abdel Fattah] al-Sissi, this would have never been done. A lot of things have changed since he’s taken over,” Mizrahi told AFP. In 2018, Sissi singled out preservation of places of worship for Egyptian Jews and Coptic Christians as a priority for his government.

“If Egypt has Jews again, we will build synagogues for them,” he said.

Of course, that was an empty gesture, but the restoration of the Eliyahu Hanavi synagogue enables the government to place a feather of tolerance in its cap. And for the few remaining Jews of Alexandria, they can carry on with the knowledge that their heritage will not completely disappear.

The Times erases ethnic cleansing of Jews from Egypt
Posted by bataween at Sunday, January 12, 2020

I appreciate the refurbishing of our Temple at a very, very very high price. But, if you think about it, could they not have used SOME money to honour the decisions of their Courts to compensate those who literally the shirts off their back, leaving Egypt?
Nicolette Pinto Mawas