Egyptian Tarek Heggy is a liberal author and academic, with a special interest in Jews and Israel. So when offered  the opportunity to show descendants of the prominent Cicurel family around his home country, he took it. Not all of the Cicurel legacy was still standing.  A note slipped to Heggy by a fellow tour guide read: "History can be distorted, but it can never be erased or denied.'

"I was delighted and honoured to be the tour guide accompanying the Cicurel family during their recent visit to Egypt. The children and grandchildren of Solomon Cicurel gathered in Egypt from the United States and France.

The trip was intended to explore Egyptian civilisation and discover its modern history in which the family played a part, especially the Egyptian economy: Solomon Cicurel and others had joined Tallat Harb Pasha to found Egypt's first bank. 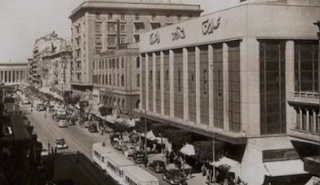 The Cicurel department store in Cairo before it was  demolished.

The biggest shock was in Cairo. The Cicurel department store had been demolished and replaced with the Faisal Islamic Bank of Egypt. Villa Cicurel bore no relationship to (the exclusive district of ) Zamalek and its demons, nor with the novel and the stories written about it. Villa Cicurel was in Giza. Here in his own house, Solomon was murdered in 1927 while sleeping next to his wife. 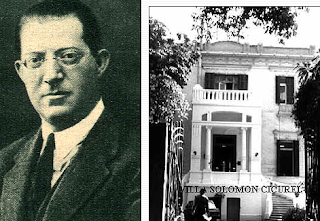 The family were most anxious to find Villa Cicurel in Giza. They wanted to rush their visits in order to look for the villa, and forego lunch for sandwiches. With the help of Google and GPS we found it. The villa is now the building of the College of Oriental Languages, as far as we could see from the newspaper photos of the time reporting the tragedy.

The family were happy to find the villa but were saddened by the tragedy, happy to take a picture of the outside but disappointed that the director would not allow them inside (they respected his refusal). They rejoiced when some confirmed that it was Villa Cicurel, but were sceptical when others said that it was the property of Princess Fatma and that the original villa had been (surprise!) demolished.

In Luxor they were introduced to Pharaonic history and civilisation, and were amazed at all the monuments.

Alexandria filled them with joy - they rejoiced when they saw the restored (Nebi Daniel)  synagogue and were proud to see the names of their ancestors engraved among the synagogue founders. They told me that Solomon Cicurel was married to a member of the Toriel family, known as Egypt’s ‘cotton kings’ in that era.

No words can describe their feelings, that I witnessed, when we visited El Shatby cemetery and they found the graves of their family members. 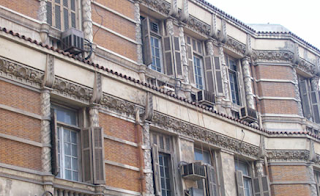 The Cicurel residence in Alexandria was demolished in 2012

The city of Alexandria was a blessing and gave us more joy when we spotted the original Oreco building (a branch of the Cicurel store catering to the middle classes) : the letters of the name are still visible on the facade.

Returning to Cairo, the American Cicurels left us to return to the States and the French branch continued their visits, alternating their tourist schedule with their search for roots. We visited the Adly St synagogue and found the name Cicurel engraved on the founders' board and on the wooden benches (No.122)." 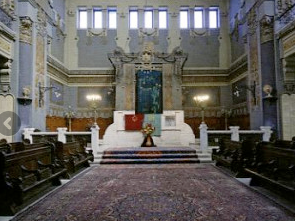 Inside the Adly St synagogue
Posted by bataween at Tuesday, January 07, 2020