New study: 'Farhud victims should be treated like Shoah survivors'

A new study completed recently is now trying to provide another legal perspective in order for its authors to suggest that the court allegedly erred in its ruling denying compensation to Farhud victims on the same terms as Holocaust survivors. Israel Hayom reports:

The study was carried out by Dr. Nissan Sharifi, a lawyer and son of Iraqi immigrants, and Prof. Gideon Greif, a historian engaged in the study of the Holocaust. The study examines the case through legal eyes while analyzing the relevant laws alongside the chain of historical events in Iraq during the relevant period.

On June 1 and 2, 1941, a serious pogrom was carried out on the Jews of Baghdad, the capital of Iraq. 179 Jews were massacred, thousands injured, hundreds of women raped and tens of thousands of homes looted and vandalized. This pogrom was later known as "Parhud" (terror against the controlled) and was the culmination of a campaign of incitement and Nazi propaganda in Iraq, which began with Hitler's rise to power in 1933. Iraq had known many coups during those years, but most of its leaders at that time were pro-Nazis. King Ghazi, who ruled Iraq intermittently from 1933 to 1939, was Hitler's friend and ally and even received a magnificent gift from him.

The person behind Hitler's translation of German into Arabic was Iraq's propaganda, economic and security minister Al Bassawi, who served under Prime Minister El Kilani, who was also a pro-Nazi.

A report by the Iraqi Investigation Committee, established by the Iraqi government, stated that the Farhud was the result of Nazi incitement in Iraq. The Jerusalem Supreme Court acknowledged this, but rejected the appeal, in part, on the grounds that German law entitled to compensation is only one that was harmed in one of the countries under Nazi occupation. The court also ruled that the Farhud happened during a "two-month" period between Iraqi governments and coups, and hence the definition of a "metastatic state" which necessitates the existence of a prime minister who allegedly interfered with it is denied.

The authors of the study say that "there is an exception in Article 43 of German law, which states that anyone who has suffered a" deprivation of liberty "can claim it - even if there is no territorial affiliation with Germany." One of the points to which the exceptional clause refers is that the plaintiff is entitled to compensation if the "foreign state government was motivated to deny liberty by the German Socialist government".

On the rejection of the definition of "metastatic state" by the Supreme Court, the investigators report that the Iraqi commission's inquiry established that "the military police, civilian police and even the Iraqi military were involved in the commission of disturbances, actively or totally ignored by the rioters". 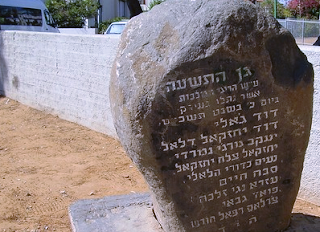 Fifty-one years since the hangings in Baghdad: Remembering the Jewish martyrs of Iraq
Posted by bataween at Monday, January 27, 2020