Moroccan imam:' we should not repeat Holocaust tragedy'

Dr Ahmad Abadi, head of the Mohammedian Scholars in Morocco, was part of the Arab delegation making a groundbreaking visit to Auschwitz on 23 January. Here is an extract from his interview with Al-Arabiya,  according to MEMRI. Morocco has been staunch in its recognition of the Holocaust. King Mohamed Vl's condemnations of the Holocaust and antisemitism are emblazoned at the entrance to the new Jewish museum at Essaouira, Beit Dakira. 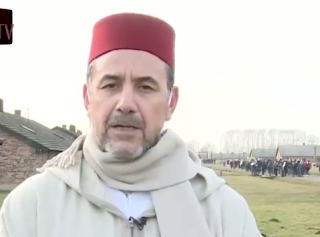 Dr. Ahmad Abadi:"What one can see in Auschwitz and its surroundings is the extent of barbarity that underlined these genocidal crimes against humanity. One can only stand amazed at how the virus of hatred penetrated a scholarly nation like the German people of that time.

Many of the German elites were involved in this [Nazi] rhetoric and they accepted – and some of them were even involved – in those crimes. Therefore, no one in the extended human family is immune to this virus.

"We should learn this lesson, because we are an extended family, so that we do not repeat such a tragedy anywhere on our planet.

"This visit is a groundbreaking initiative that may refute the widespread belief that Muslims can accept crimes against humanity. There is not even the smallest indication of this in our true religion, which forbids harm, especially since the people who were attacked had done nothing to justify it."

Read article in full
Posted by bataween at Thursday, January 30, 2020