Not all Israeli Holocaust survivors came from Europe: thousands of  MENA jews are entitled to claim benefits as a result of the persecution they suffered. However, it is curious that this Jerusalem Post omits to mention Tunisian andLibyan Jews who were impacted directly by the Nazi and Fascist wartime occupations. 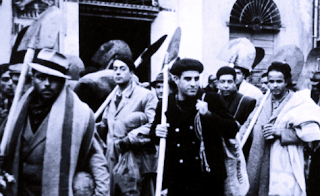 Tunisian Jews on their way to forced labour camps

Many of the non-European survivors had their roots in the Middle East where persecution was also rife.

Some 18% were born in Morocco and Algeria, where Jews suffered under the French Vichy regime, overseen by Nazi rule.

A further 11% escaped Iraq after a two-day antisemitic pogrom in 1941 known as the Farhud, in which 180 Jews were killed and a thousand more injured, in scenes reminiscent of Kristallnacht.

Some sources put the number of dead much higher; the Israel-based Babylonian Heritage Museum says a further 600 unidentified victims were buried in a mass grave, according to the BBC.

The Holocaust Survivors' Rights Authority distributes in excess of NIS 4 billion in benefits and grants each year to around 59,000 Israelis who survived the Holocaust, each of whom can claim up to NIS 6,000 a month. In addition to the direct payments, the authority also handed out NIS 415 m.
worth of medicines, provided a further NIS 493 m. on nursing services, and funded medical treatments and equipment at a cost of NIS 132 m.

Read article in full
Posted by bataween at Sunday, January 26, 2020