Zionism is the polar opposite of colonialism, and the exodus of Jews from Arab countries is just the last stage in a project to subdue indigenous and unassimilable peoples of the Middle East, argues Dani Ishai Behan in this important article in The Times of Israel.

Now let’s discuss the real colonialism occurring within Palestine – specifically, that conducted by Arab Palestine itself. 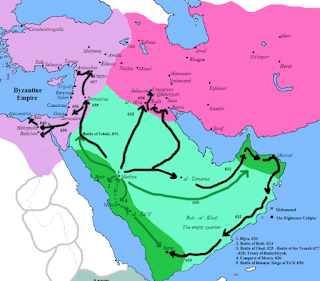 As with many powerful nations in the early Middle Ages, the Arabs sought to expand their holdings and their power through acquisition of foreign territory. Conquest, war, and totalization were the popular mode of “progress” in that era, so it isn’t surprising that the Arabs sought to build an empire of their own. Their first conquests included, by dint of proximity, the upper parts of Middle East, specifically Iraq, Israel, Lebanon, and Syria.

They immediately set about the project of “Arabization”: raising taxes on indigenous peoples, restricting our government access, curtailing our civil liberties, replacing our sacred sites with mosques (the most notable example being the Al-Aqsa compound, which sits on the very location where our Temple once was), and effectively reducing us to second class citizens in our own lands. This system was cynically named “Al-Dhimma”, or “the protected people”.

Those who defied this system, or were perceived as defying this system, were met with massacres and bloodshed, as the seemingly endless list of pogroms (and the eventual ethnic cleansing of Jews from “Arab lands”) clearly shows. The only way to escape all of this was to convert to Islam, abandon all trappings of indigenous identity, and become “Arabs”.

Countless people throughout the Middle East and North Africa did just that, trading in their indigenous identities for the privileges of Arab status. However, as with their brethren in Europe, relatively few Jews were willing to assimilate, and most held steadfast to their people, their religion, and their way of life.

Despite this, the Jewish nation was not expected to survive. Arab rulers believed we would eventually cave in and convert, or languish in dhimmitude until we all died off. The success of Zionism shattered these expectations. Not only did we survive exile in Europe/Babylon/etc and under centuries of Arab occupation, we regained a substantial chunk of our ancestral territories – defeating 6 well-trained Arab armies bent on genociding us in the process.

The acute humiliation felt by the Arab states after the war, and the resulting flood of refugees (both Jewish and Arab), set the stage for the ongoing Israel/Palestine conflict and the Palestinian cause.

What, then, is the Palestinian cause? It is, in essence, a reaction to Zionism and the State of Israel itself. Although it ludicrously presents itself as an indigenous rights-oriented cause, it is really nothing more than a front for Arab imperialism. It is hoped that, by repatriating the 6 million or so descendants of Arab refugees into Israel, the Jews in Israel will be demographically overwhelmed and we will be robbed of our self-determination once more, transforming our country into a de facto (and eventually de jure) Arab state.

The Palestinian cause has nothing whatsoever to do with human rights or “anti-colonialism”. It is about nothing more than the Arab world’s desire to regain its lost “honor” by accomplishing through stealth what it failed to do by force: restoring their hegemony over Israel and putting the “uppity” Jews back in their place.