Following the 1929 Hebron massacre, which began as a clash of religious claims to the Western Wall in Jerusalem, three initiatives to settle the dispute by buying the Wall and surrounding buildings from the Muslims emerged. One was a remarkable proposal by Prince Ali Pasha of Egypt, the uncle to the future king Farouk. Another came from the entrepreneur Pinchas Rutenberg. The third came from Baron de Menasche, an Egyptian Jew and well-known philanthropist. The Mufti, Haj Amin al-Husseini, turned down all three. Read the full story in The Times of Israel:

In 1926, a Jewish effort was launched to buy properties in front of the Wall as a first step toward acquiring the entire Moghrabi area and eventually the Wall itself.

In early October 1928, Frederick Kisch, a Jerusalem-based Zionist official proposed, in a confidential letter to the Zionist Executive in London, that the Muslims be compelled to sell the pavement and the Moghrabi area to the Jews for £100,000, “in exchange for another suitable area in the Old City, with the inevitable addition of a cash payment for the benefit of the Wakf authorities.” But these efforts, like those preceding them, went nowhere. 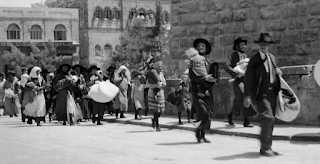 Jews fleeing their homes in Jerusalem in 1929

Suddenly, however, in the days immediately following the Hebron massacre, three new initiatives appeared. While none of these new initiatives succeeded, their close proximity to each other and the dramatic nature of their presentation make them, especially Prince Mohamed Ali Pasha’s proposal, unique in the history of Mandate Palestine.

The first initiative came from a prominent Egyptian Jew, the Baron Felix de Menasce, the President of the Israelite Community in Alexandria. On August 26, 1929, only two days after the Hebron Massacre, Menasce walked into the British Embassy in Paris and met with Adrian Holman, the Second Secretary at the Embassy.

Later that day Holman cabled the Foreign Office in London and reported as follows: [Menasce] explained to me at some length that the frequent cases of rioting at the Wailing Wall were due to the fact that the buildings surrounding the Wall were in the hands of the Moslems and had always been looked upon by the British Government as bearing a religious character. It had consequently always proved impossible for the Jews to buy the buildings in question and thus prevent troubles in the future. He maintained that the buildings were purely civil as opposed to religious and that the present moment might be an opportune one for the British Government to reconsider the possibility of arranging for the Jewish community to buy the buildings for demolition or other purposes. He was sure that if this were done, the Jewish community throughout the world would easily be able to find the necessary sum of money.”

George W. Rendell of the Foreign Office’s Eastern Division responded to Holman’s cable on September 7, noting the Muslims viewed the Wall as a religious site and would not be willing to sell the nearby dwellings to the Jews. Rendell poured more cold water on the idea, adding, “[t]he Colonial Office are, I think, familiar with the advantages and difficulties of a solution on the lines of the Baron de Menasce’s proposal, and seeing how overworked they are at the moment with a variety of Middle Eastern crises, I am not adding to their correspondence by passing the suggestion on to them.”

Menasce sent a handwritten letter in French to Weizmann reporting on his meeting with Holman at the British Embassy in Paris. Menasce wrote, “J’ai la conviction c’est le moment psychologique de transfer tout l’argent necessaire, si jamais les Juifs deraint acheter ce Wakf …” (“I am convinced that if the Jews are ever going to buy this Wakf, this is, psychologically, the right time to find all the necessary money …”)

No record has been found indicating whether Menasce had been acting on Weizmann’s behalf, or whether Weizmann ever responded to Menasce.