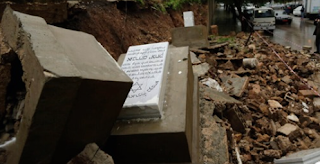 A severe storm has toppled an old wall and several graves at the only Jewish cemetery in the Lebanese capital,  Jewish News reports.

The cemetery in Beirut’s Sodeco district, which dates back to the early 1820s, is the city’s only Jewish cemetery and has been closed to the public for many years.

Heavy rain and strong winds toppled the cemetery’s stone wall, which fell on to several graves and sent some headstones crashing down.

The fallen gravestones with Hebrew writing on them could be seen from the main street where the wall had collapsed.

According to AFP (French),  Nagi Georges Zeidan, a volunteer who keeps watch over Lebanon's Jewish heritage, says that at least four headstones were damaged.

Zeidan reports that the skeletons are still in their coffins but these need to be retrieved from  the rubble. He called on the authorities to intervene.
Posted by bataween at Friday, December 27, 2019