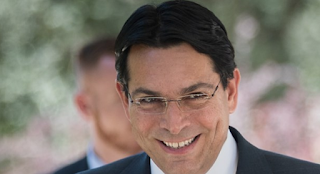 According to Danon (pictured), the international community continues to adopt a one-sided agenda: "There were an estimated 850,000 Jews who were forced out of Arab countries and Iran and became refugees in the 20th century. These Jews were subject to brutal attacks and harassment and were forced to flee leaving everything behind: in Iraq, Egypt, Morocco, Iran, and many other countries. And still, we don’t hear the international community speak of them when they discuss the refugees of the conflict, perhaps because it doesn’t serve the Palestinian narrative."

Danon announced that Israel would submit a resolution to formally recognize the Jewish refugees from Arab countries and Iran, bring it for a vote in the General Assembly. "Israel took in these refugees and integrated them into our society. The international community on the other hand ignored them and built corrupt institutions that only serve so-called Palestinian refugees.

To coincide with the commemoration of the 850,000 Jewish refugees expelled from the Middle East in the 20th century, Israel’s men in New York are doing what they can to ensure the victims are brought to Justice.

The Jerusalem Post reported, UN Ambassador Danny Danon will introduce a resolution recognizing Jewish refugees from Arab countries.  Danon will be competing with the UN’s Palestinian representative who plans to introduce pro-Palestinian resolutions like supporting their right to return to Israel.

The UN discussion will coincide with the 72nd  anniversary of the Nov. 29 partition plan, which recommended Israel be divided up into an independent Jewish and Arab state.