According to Times of Israel, Egypt has announced that renovations to the Nebi Daniel synagogue in Alexandria have been completed. The synagogue floor features a glass window to allow visitors to see traces of an earlier synagogue on the site. A group of Egyptian Jews hopes to celebrate a 'synagogue-warming' with a trip to Alexandria in early February.

Egypt’s Jewish community, which dates back millennia, numbered around 80,000 in the 1940s, but today stands at fewer than 20 people. The departure of Egypt’s Jews was fueled by rising nationalist sentiment during the Arab-Israeli wars, harassment, and some direct expulsions by former Egyptian president Gamal Abdel Nasser. 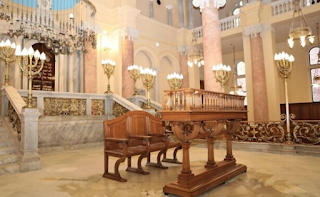 Egypt and Israel signed a landmark peace treaty in 1979 and have since maintained formal diplomatic relations. But public opinion in Egypt has largely remained hostile to the Jewish state.

Only four or five septuagenarian and octogenarian Jews currently reside in Alexandria,  Nacamuli  said. The city used to house 12 synagogues, but most of them were sold over the years to support the Jewish community there, and its infrastructure and institutions, he said.

Egyptian Antiquities Minister Khaled al-Anani visited the Eliyahu Hanavi synagogue last Friday, the ministry said in its statement. The Egyptian government maintains an interest in preserving Egypt’s antiquities –“whether they are Pharonic, Jewish, Coptic, or Islamic,” the statement said.

Read article in full
Posted by bataween at Thursday, December 26, 2019