In an interview recorded by MEMRI with Libyan TV, Raphael Luzon, a UK-based activist on behalf of Libyan Jewry, demanded the right for Jews to hold Libyan nationality and visit Libya, as Jews do in Morocco and Tunisia . However, he did not demand compensation or return. This is a departure from his previous position : in the past he has demanded to return and even play a part in the Libyan government. His arrest and imprisonment during his disastrous 2012 visit is likely to have changed his views. 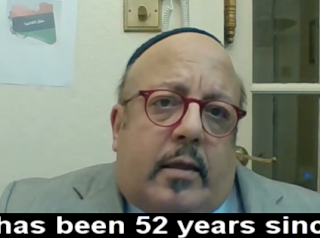 Raphael Luzon, the U.K.-based President of the Union of the Jews of Libya, said in a December 2, 2019 interview on Wasat TV (Libya) that Libyan Jews do not want to return to Libya, but to be recognized as Libyans and granted Libyan nationality.

He said that second- and third-generation Libyan Jews should be allowed to visit Libya and see where their ancestors lived like Jews from Tunisia, Morocco, and Egypt are permitted to do.

Al-Taher Makni of the Libyan High Council of State responded that if a person has no other citizenships, then Libyan law does not prevent him from being granted citizenship, and Luzon argued that Libya’s laws are meaningless because the country is in chaos and that perhaps Libyan Jews are treated as they are for religious reasons.

Luzon also said that Libyan embassies are of no help to Libyan Jews and that he has been physically attacked outside the Libyan Embassy in London. In addition, he argued that the Jews are Libya’s Palestinians since Libya took their money and turned them into refugees.


See interview  in full
Posted by bataween at Thursday, December 12, 2019

A former Libyan Jew now an Italian citizen, Dr Jerbi [from roots on Djerba?], also wanted to go back. He did go and visited his old synagogue in Tripoli, now a wreck and a ruin. His reception was, shall we say, unfriendly. In fact, he got away with his life and, I believe, with Italian govt assistance. Dr Jerbi, a psychiatrist, wrote a play about his experience in going back to Libya which he presented free of charge in a theater in Rome. Which I saw when I was there.