The story broken by Israel Hayom that Jewish refugees from Arab countries lost some $150 billion in assets and property has now been picked up by other media. Al Monitor, for instance, interviews Geula, a refugee from northern Iraq in 1948 :

As Geula tells it, one day the family patriarch left the keys to their home with a Muslim neighbor and asked him to continue to tend the family’s vineyards and orchards, where they grew grapes, peaches, and other fruits.

The family then set off for Baghdad. Before leaving the country, they were forced to hand over all their remaining possessions, including cash and jewelry. Geula remembers hearing people say, “Bring a bucket and demand that all the women of the family put their jewelry in it. If any of them takes their time about it, rip the earrings from their ears and the rings from their fingers.”

She further remarked, “Then they put us in a room, ordered us to undress, and checked to make sure that we didn’t hide any money or jewelry in our clothes. We arrived in Israel with just the clothing on our backs. That’s all.”

The legislation had two purposes: to ensure that Jews from Arab lands and Iran were compensated for the property they left behind and to counter demands by Palestinian refugees who left their homes in 1948 and 1967 to receive compensation for property that they left behind.

Accordingly, in a conversation with Jewish leaders in the United States in January 2014, Martin Indyk, US envoy to peace talks between the Israelis and Palestinians, said that in addition to compensation for Palestinian refugees, any framework agreement would also include the right to compensation for Jews who left their homes in Arab lands. 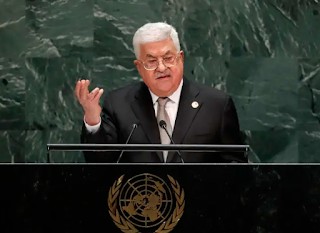 Mahmoud Abbas addressing the 74th session of the UN

Palestinians have the right to claim restitution for their loss of natural resources due to the Israeli occupation, the United Nations General Assembly has said, according to  the Jerusalem Post(with thanks :Vicky)

It approved by 160-6, with 15 abstentions an annual resolution called “Permanent sovereignty of the Palestinian people in the Occupied Palestinian Territory, including east Jerusalem, and of the Arab population in the occupied Syrian Golan over their natural resources.”

It is one of 17 annual pro-Palestinian and anti-Israeli resolutions the UNGA has approved this month. The UNGA is slated to vote on at least two other such texts this month.