Hanucah lighting is held in Kurdistan

For the first time, a Hanukiah was lit at the tomb of the Prophet Nahum at al-Kosh in Kurdistan, as reported by i24 News. The lighting took place on the last day of the festival. Yet there are no practising Jews in Kurdistan and no community to speak of, other than the descendants of 400 families with Jewish roots, all of whom are now Muslim. One assumes that the ceremony took place as a symbol of defiance towards Da'esh (IS), which had reached within 11 miles of the tomb before being defeated, and enables Kurdistan to show off its pluralism. The decision to hold the ceremony could also be linked to the renovation of the tomb of Nahum. 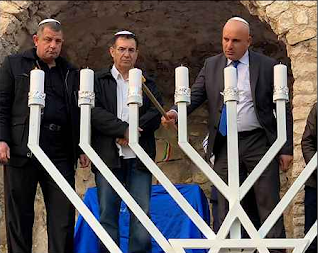 Some had traveled from Israel, but the majority came from the three provinces of Iraqi Kurdistan to come together to light the Hanukkah candles, which celebrate the miracle of the cruse of oil that lasted for eight days.

"It's the first time we are celebrating Hanukkah in Iraqi Kurdistan," one of the organizers Ranj Cohen said.

Cohen, an Iraqi Kurd, registered his association with the authorities and plans to complete the renovation of the prophet Nahum's tomb so as to hold services there on Saturdays.

He hopes to have all readied early next year.  For the time being, the small congregation distributes sweets and chocolate-iced cakes as they hope for better days in Iraq, and especially in Kurdistan.

In 2015, when IS still occupied a third of Iraq and the territory of the self-proclaimed "caliphate" bordered the majority-Muslim autonomous region, the local authorities appointed a representative of the Jewish community to the Ministry of Religious Affairs.