During her November whirlwind tour of the UK, Levana Zamir, head of the Coalition of organisations of Jews from Arab countries in Israel, was interviewed by Sandy Rashty for the Jewish Chronicle. Mrs Zamir used the occasion to reiterate her support for  an International Fund to compensate Jewish and Arab refugees as a tool for peace.

An Egyptian-born Jewish activist has called for greater recognition of Jews from Arab countries, saying that compensation for those forced to flee their homes could help bring peace to the region. 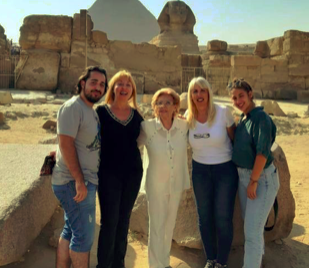 Levana Zamir with her family on their recent visit to Egypt

Levana Zamir, who fled her home in Cairo in 1948 aged 10, is now working with Israeli authorities to increase international awareness of the issue.

“I have been working on this for 20 years, going to the Knesset and asking for recognition,” she said. “And it’s not only me; we are all working together — the Iraqi Jews, the Syrian Jews, the Libyan and Yemenite. Now that we have recognition of [our story] in Israel and all over the world, now we want an international fund to be established for Arab and Jewish refugees.”

Video clip of Levana's talk to students at UCL

Now that my parents are dead, where will their compensation go? They did not survive the expulsion from Egypt quite well. Less than two years after departure, I lost my mother, 8 years later my father followed. Can any amount of money atone for my loss?

Not much can help the hurt our parents lived with and the pain and struggles they managed to overcome as they began lives in new lands, but for those of us with children and grandchildren, whatever may ease their lives and ours into the future can be of help. The compensation cannot atone for our losses - we have learned to live with those - but it is our due, and our parents would have wished it for us.