When Arabs fought with Jews against the Nazis

This article by Nadav Shragai in Israel Hayom shows that the picture of Arab collaboration with Nazism was not as black-and-white as is often thought. However, the numbers produced by Israeli-Arab professor Mustafa Abbasi are misleading: according to the historian Georges Bensoussan, the Palestinian Arabs who served with the British during WW2 (up to 12,0000) were outnumbered by a factor of 15 times by the Palestinian Jews, and there were half as many Jews in Palestine as Arabs. According to 'Nazi Palestine' (Mallman/ Cuppers, p 145) 134,000 Jews came forward to enlist in the British army - every second Jewish man - and 20,000 women. (With thanks: Lily) 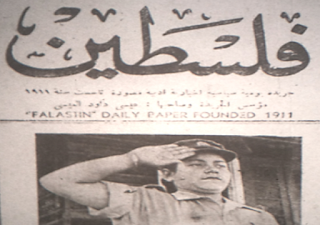 One day, completely by chance, Professor Mustafa Abbasi from the village Jish in the upper Galilee, uncovered a family secret. Abbasi had wondered aloud how there could be a five-year difference between his mother's date of birth and that of her younger sister. He then heard for the first time that his grandfather, Said Abbasi, had spent five long years away from home, volunteering with the British Army in World War II, battling the Nazis alongside Jewish volunteers.

Only later, after he had become a researcher and delved into the subject, did Abbasi learn how widespread a phenomenon that had been: thousands of Arabs and Jews from Mandate Palestine had fought side by side against the Nazi scourge.

As a historian and as a professor of the history at Tel-Hai Academic College, Abbasi has personally interviewed or secured testimonies from dozens of Palestinians who served in the British army in World War II and fought alongside Jews. Radwan Said of Kafr Kana told Abbasi that he had served as a sniper and killed three Nazi soldiers in battles in Italy. Abbasi spoke to the elders in his home village of Jish. One, Zaki Jubran, fought the Nazis along with his brother. Abbasi would eventually discover lists of more and more Arabs who volunteered for the British army and served alongside Jews – from Jaffa, Jerusalem, Safed, Jenin, and Nablus. Tiberias alone, a city in which Jews and Arabs coexisted peacefully for many years, supplied hundreds of Arab volunteers.

Hundreds of Arab fighters lost their lives. Others were taken prisoner. Yet more are still missing in action, over 70 years later. This is a historical episode that is rarely discussed. It does not align with the various narratives about the history of the Jewish-Arab conflict prior to or after the war years. Abbasi's research reveals that this was certainly no passing "phenomenon."

He writes about the joint Jewish-Arab war service in an in-depth article published in the last issue of Katedra, the oldest academic journal on Land of Israel studies, published by the Yad Izhak Ben-Zvi. He might turn it into a book. All in all, some 12,000 Arabs from Mandate Palestine volunteered for the British army during World War II, approximately half the number of Jewish volunteers who joined up. Hundreds of Palestinian fighters were captured. Approximately 300 died in battle.

Relations between the Jewish and Arab volunteers were mostly good. The leaders of the Jewish Yishuv, Chaim Weizmann and David Ben-Gurion, eventually had the Jewish volunteers removed from the mixed unit to establish the famous Jewish Brigade, which would go on to provide a crucial military basis for Israel in the 1948 War of Independence. The leaders had never liked the idea of Jews and Arabs from Mandate Palestine serving together, and there were also plenty on the Arab side who were against it.

Read article in full
Posted by bataween at Tuesday, August 13, 2019