Did you know that the famous Baghdad rabbi Yosef Hayim was rescued from a well aged seven? That a woman, Rachel Hacham,  founded the Baghdad School for the blind? Here are 10 things you may not have known about early-20th-century Baghdad Jewry, according to Bet Hatefutsot (the Museum of the Jewish Diaspora) (With thanks: Ruth): 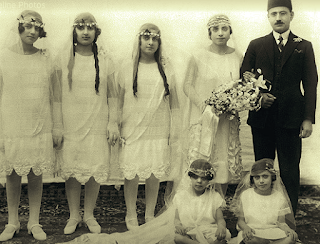 Renee and Abraham El-Kebir on their wedding day in 1926

There were 35,000 Jews in Baghdad at the beginning of the 20th century, comprising about 35% of the city’s population. There were no less than 30 synagogues and eight Jewish newspapers were published.

A portrait of the Hacham Rabbi Yosef Hayim – known as the Ben Ish Hai - hung in every synagogue. Legend has it that when Yosef Hayim was seven, he fell into a deep well and was miraculously saved. He swore an oath in the well to devote his life to studying Torah if he made it out alive. Yosef Hayim eventually became one of the great sages of his generation in Baghdad and throughout the Jewish world.

Rabbi Yosef Hayim never missed delivering before an audience of thousands a Shabbat sermon that lasted three hours. Rabbi Yosef Hayim’s expounding on the Torah became legendary and was peppered with anecdotes and riddles. Rabbi Yosef Hayim died in 1909 on a pilgrimage to the Prophet Ezekiel’s Tomb in the Iraqi village of Al Kifl.

Britain took control of the Land of the Tigris and Euphrates in 1917 and named King Faisal I it's ruler. His reign was considered the Golden Age of Iraqi Jewry. The Jewish community was represented in Iraq’s parliament and its commercial trade with Britain was heightened. Sir Sassoon Eskell, who was among Baghdad’s greatest Jewish merchants, would become the first Jewish finance minister of Iraq and a leader of the Iraqi nationalist movement.

Known as the “Rothschilds of the East,” the Sassoon family’s tremendous influence in Iraq extended throughout the early decades of the 20th Century to Britain, India, Hong Kong, Singapore and other corners of the Far East. The family’s expansive commercial network included multiple branches of its original business in Baghdad, making Iraq an important player in global commerce. Among the family’s famous offspring are Victor Sassoon, owner of the international Coffee Bean chain and Rachel Sassoon Beer, the former chief editor of the British “The Sunday Times,” who played a central role in the Institute of Journalists’ and Institute of Women Journalists’ campaign to prove Alfred Dreyfus’s innocence.

In 1924, a woman named Rachel Hacham established the first school for the blind in Baghdad, considered the first school of its kind in the Jewish world. The school offered a modern curriculum and its students learned to play a variety of musical instruments. Several of them were later hired to play for Baghdad’s Iraqi radio station orchestra. They were thankful to Rachel Hacham throughout their lives.

In 2003, American soldiers discovered a collection of thousands of books, photographs, and documents pertaining to Iraqi Jewry in the flooded basement of the Mukhabarat Iraqi National Intelligence Service in Baghdad. The precious collection was airlifted to the US to be dried, demolded, restored and preserved. It was named the Iraqi Jewish Archive. Among the artifacts were dozens of copies of a Hebrew language instruction textbook entitled “Alfa Beta.” Pages 73-74 were ripped out of nearly every copy, because they featured a song declaring loyalty to King Faisal I, who was hung by rebel forces in a 1958 military coup.

The “Alliance” school network, combining Hebrew-language instruction with a modern curriculum, operated in Baghdad. The school contributed greatly to bridging the gap between religion and secularism among Iraqi Jewry. This enlightened atmosphere gave rise to what would become a Jewish intellectual elite of Baghdadi descent. Among them were Israeli writers Samir Naqqash and Sami Michael, Professor Sasson Somekh, and others who defined themselves as “Jewish-Arabs” and combined Muslim-Arab culture and Jewish culture in their works.

King Ghazi rose to power in 1933. A new wave of pro-Nazi sentiment in Iraq at that time was heightened by the visit of Mufti of Jerusalem Haj Amin Al-Husseini – who maintained close ties to the Nazi Party – and by the translation into Arabic of Adolf Hitler’s “Mein Kampf.”

The Farhud pogrom that erupted on the holiday of Shavuot in June 1941 is still considered an open wound among Baghdadi Jewry, who numbered 150,000 at that time. During the riots, rape, chilling murders of infants, women, and the elderly, and looting and burning of stores took place. Children were thrown into the Tigris River in front of their parents. More than 180 Jews were murdered and nearly a 1,000 were wounded. “We saw through the window dozens of people armed with knives, axes, and firearms. A few of them were dragging objects and furniture that they had looted from Jewish homes,” testified Baghdadi Jew Yosef Nimrodi. “I saw a woman carrying a baby’s leg in her hand.” The Jews were buried in a mass grave.

From The Jew in You, Facebook page of the Museum of the Jewish Diaspora

Video for the Babylonian Jewry Heritage Center (with thanks: Sami)

as I understand the Dreyfus Case, Rachel Sassoon Beer and her newspaper played an important role in supporting Dreyfus and the Dreyfusards.