One of the most prominent specialists in contemporary Arabic literature, Professor Sasson Somekh, has died. Born in 1933 in Iraq, Professor Somekh was a prolific writer on contemporary Arabic poets and authors. In the 1990s, he spent two years in Cairo and was a friend of the Egyptian author Naguib Mahfouz. He was awarded the Israel Prize in 2005. 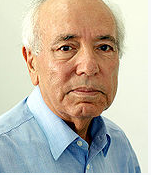 According to Wikipedia, Somekh did his doctorate at Oxford University in 1966–1968. His subject was the novels of Naguib Mahfouz, concentrating on the Cairo Trilogy. Over the years Mahfouz and Somekh became friends. The thesis supervisor was Egyptian scholar Mustafa Badawi. Upon his return to Israel he became a lecturer in Arabic Literature. He served as chairman of the Arabic Language and Literature department at Tel Aviv University in 1972–1984. In 1980, he became a full professor. Between 1982 and 2003, he held the Helmos Chair for Arabic Literature. In 1996–1998 he was head of the Israel Academic Center in Cairo. He was a visiting professor at Princeton University, St Antony's College, Oxford, Annenberg Research Institute, NYU and Uppsala University. In 2004, he received an honorary doctorate from Ben Gurion University.

He is among the founders of the Arabic Language Academy in Israel, established in December 2007 in collaboration with several former students.

He wrote ten books, many translations from Arabic to Hebrew, among which are four anthologies of modern Arabic poetry, and about 90 articles in academic journals. Over the past 50 years Somekh published hundreds of articles in literary magazines and supplements such as Iton 77, Halikon and Moznayim. His articles deal mainly with modern Arabic literature and writers.

At the age of 70, Somekh wrote the first volume of his autobiography, Baghdad, Yesterday: The Making of an Arab Jew. The book was published in Hebrew and has been translated into Arabic, English and Turkish. In the book he describes his life as a Jewish child and teenager in Baghdad during the first 17 years of his life.

The second volume, Yamim Hazuyim ("Call it Dreaming") was published in 2008. It describes his life between Tel Aviv, Oxford, Princeton, and Cairo between 1951 and 2000. The book moves between the four major stations of his life: Tel Aviv - where he lived and worked for 40 years as a professor of Arabic literature; Oxford - where he received his PhD; Princeton - where he was occasionally a visiting professor in the 1970s and '80s; and Cairo - the city in which he did much literary research and where he headed the Israel Academic Center.

More about Sasson Somekh
Posted by bataween at Monday, August 19, 2019