Photographic memorial to a vanished world

In the 1980s, artist Myriam Tangi teamed up with photographer Frederic Brenner to visit the remnant communities of Djerba and Yemen. Brenner's photographic essay, narrated by Tangi in the Jewish Review of Books, stands as a memorial to a vanished world: the majority of the Jews in Brenner's photos have emigrated since, and there are fewer than 50 Jews still living in Yemen.

In 1982, I organized an evening dedicated to artists at the first Festival of Jewish Culture in France, created by the filmmaker Emil Weiss. The theme of the program was “Tradition and Modernity,” and among the artists I invited was a young photographer named Frédéric Brenner, who had just finished an as-yet unpublished series of images of Meah Shearim. Although I was primarily a painter at the time, I had already begun experimenting with photography, and I could see how extraordinary Brenner’s work was.

The next year we started traveling and working together on what would become the 20-year “Diaspora” photography project, which Brenner had just begun and which culminated in the Diaspora: Homelands in Exile book and traveling exhibition.

Our first trip together was to the Jewish community of Djerba, an island off the coast of Tunisia, on Sukkot in 1983. It was there that I realized that I, too, should bring my camera on these trips, first to capture Frédéric from backstage, in the act of taking pictures, but also to take photos myself. In October, when we made our first trip to Yemen, I brought my camera, as well as my paint brushes. 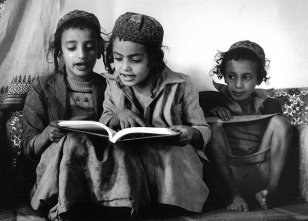 We had learned of the last Jewish communities of Yemen from the architects Pascal and Maria Marechaux, who studied the traditional earth architecture of Yemen, touring the country on a motorcycle to see the gorgeous painted houses and the unique mud-brick buildings, some of them hundreds of years old and 70 feet high. They had come across small Jewish communities here and there in their travels.

These were the remnants of an ancient community that, by legend, goes back to the Queen of Sheba’s visit to King Solomon or, perhaps, to the period immediately following the destruction of the First Temple in Jerusalem.

In 1949 and 1950, the vast majority of Yemenite Jews, almost 50,000 of them, had been spirited to Israel on transport planes flying out of Aden in the famous Operation Kanfei Nesharim (“On Eagle’s Wings,” an allusion to Exodus 19:4). Very little was known of those who remained, and few foreigners traveled to Yemen.

Read article in full
Posted by bataween at Thursday, August 01, 2019