Morocco appears to be following Poland in making itself a magnet for Jewish tourism. But its bold efforts to restore and preserve Jewish heritage is creating pride among Moroccans themselves. Jacob Judah reports in Haaretz (with thanks: Imre):

“What the state did is take the conservation of Jewish heritage, and make it more visible,” says anthropologist Boum. In this respect, Morocco is an exception in the Arab world, he notes, calling the decision, “a courageous act.”

Some suggest that the government’s support of Jewish projects is part of an attempt to project an international image of Morocco and its monarchy as open, tolerant and modern.

The preservation projects figure prominently in documents produced and disseminated by Moroccan lobby groups in the United States.

In private, some in the tiny Jewish community express concern about these developments. Most of the country’s approximately 2,500 Jews are concentrated in Casablanca. In 2003, terrorists targeted Jewish sites in the city. Some Moroccan Jews worry that the increasingly high profile of the community will attract unwanted attention.

But others see this newfound attention on Jewish heritage as a healthy development. “Morocco has made a colossal effort to preserve its Jewish heritage,” says Zhor Rehihil, director of the Casablanca's Museum of Moroccan Judaism. This is changing the views of ordinary Moroccans, who now recognize that “this is part of Moroccan heritage and it is up to us to preserve it for future generations", says Rehihil. 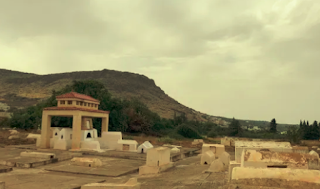 The Sefrou Jewish cemetery; in the background, the hills housing the Cave of the Jew.


Read article in full
Posted by bataween at Monday, August 05, 2019