Morocco is what every tourist expects

In her two articles about her first visit to Morocco (first one here), Khen Elmaleh goes in search of an authentic identity, as if an Israeli Jew with Moroccan roots can never wholly feel at home in Israel. Haaretz loves articles idealising Morocco, and Khen is not the only Israeli to be seduced by its charms - she meets an Israeli fashion designer, an artist and singers who have made their careers there. But in the second of her articles, discomfort creeps in: Morocco's enchanted image of the Orient is for foreign consumption only, there is no local middle class and a huge gulf separates rich and poor. (With thanks: Michelle)

Everyone loves Marrakech. Yves St. Laurent loved it. Winston Churchill loved it. Everyone who has ever visited has loved it. I have never heard a bad word about Marrakech. And the truth is that it’s easy to see why. It is an enchanted urban oasis with pink buildings and towering green palm trees. It is a combination of modern and old, of urban tumult and ancient narrow alleyways. It is exactly what every tourist from abroad would expect to see in Morocco, in one place. Maybe because of that, I had a hard time with it.

In Marrakech you are a tourist, first and foremost a tourist. The whole city is aimed at serving you as a tourist, selling things to you as a tourist, presenting to you what you want to see, massaging your back as a tourist and taking from you what can be taken from a tourist: money. In return the city sells you the perfect Orient, and it's embodied in exclusive nightclubs like Comptoir Darna, designed as a showy colonial salon; in the cobras and monkeys at the big square, Jemaa el-Fnaa; in the huge bazaar where, between a traditional djellaba and pointy babouche slippers, someone will also try to sell you a massage at a questionable establishment nearby. It is waiters in a tarboosh at a highly rated restaurant that locals hardly patronize, it is one thousand and one nights, every night. And when you say “No thanks” in Arabic everyone is surprised – “Aha, she’s one of us!” – but that doesn’t stop them from trying to sell you something.

Despite all that, I was glad to be in Marrakech now. I could forgive those characteristics of the Marrakechis. First of all, and this something that can be said of all of Morocco – these folks are just plain courteous and friendly even when they are trying to take something from you. And secondly, who can blame them? People are just trying to make a living – and poverty is no stranger to urban Morocco – and if the masses of Frenchmen and Brits swarming in the streets of the Old City want their couscous served with a tarboosh and traditional garb, so be it. I think I was simply angry because they saw me as a tourist. And as a Moroccan I got angry all over again at the Europeans who set standards and have a certain perception of how Morocco ought to look, and everyone simply scampers around them. 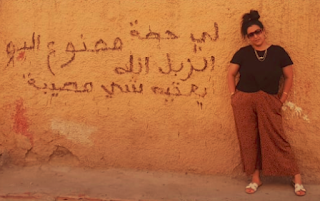 There’s something in this split experience that manages to trouble me during my entire trip in Morocco. On the one hand, I am a tourist with money that enables her to experience things and sit in places where the locals, if they aren’t wealthy, don’t sit. On the other hand, I am not a wealthy Moroccan nor am I even really Moroccan. But when I arrive along with my whole aura of foreignness at one of the hottest spots in town, the Nomad restaurant in the medina of Marrakech – and I ask the waiter about a French word on the menu that I hadn’t understood, and he tries to explain it to me in English (“It’s something that looks like an onion and has an anise flavor”) and a second later I come back with “Aha! Bish bash!” – he cracks a smile that's even bigger than the one that in any case had been spread across his at-your-service face, and says with a kind of a sigh of relief, like someone who has discovered that the connection between us doesn’t pass only through my foreign currency: “Oh! Bish bash!”

Read article in full
Posted by bataween at Sunday, August 11, 2019