In the week in which the 90th anniversary of the Hebron massacre is being marked, the last survivor, Avraham Kiryati, 98,  recalls the horrific events of that day in the Jerusalem Post: 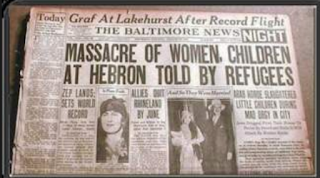 Time has not dimmed the powerful memories that 98-yearold Avraham Kiryati has of the moment his grandfather Eliyahu Capilouto was stabbed during the Hebron massacre of 1929.
“My grandfather was dressed just like the Arabs,” said Kiryati. He went out to see what was going on. They [the rioters] pushed him inside and stabbed him on the side of his body. Kiryati was then a boy of eight.

When they came out of hiding, they found Eliyahu lying on the floor in a pool of blood.

He is a descendant of Jews who escaped the Spanish inquisition, settling first in Safed and then in Hebron.
His grandfather Eliyahu was a well-known carpenter and electrician, so well respected that he was even hired to work in the Tomb of the Patriarchs at the time when Jews were not allowed into the building – for 700 years, they could only pray up to the seventh step on the outside of what was then a mosque.

Eliyahu built a home a slight distance away from what Kiryati called the Jewish “ghetto,” on a road that led to Gaza.

Kiryati’s parents had moved to Jerusalem, but had sent him to spend some of his summer vacation with his grandparents, a decision that placed him in the wrong place at the wrong time.
> In a separate interview, Kiryati’s nephew, Yossi Saness, also described how in that moment Eliyahu and his wife, Rivka, a gold dealer, had initially stood outside their house to try and dissuade the rioters from entering. After her husband was stabbed, she was able to bribe the rioters to leave by offering them gold she had stashed in the house, Saness said.

“All the survivors were taken first to the police station and then to Jerusalem,” Kiryati said.
In the following months, his grandfather died of his wounds.

When he thinks about it now, he said, the events of that day “is more or less what happened in the Holocaust.” In the early 1930s, his grandmother Rivka was among a small number of families who returned to the city and attempted to resurrect the Jewish community in the biblical city. Their efforts came to naught, as the British insisted that they leave in 1936.