Not for the first time, Jews were banned from praying at the purported site of Aaron's tomb in Jordan after they were seen performing 'Jewish rituals'. The same no-prayer regimen appears to apply at the Temple Mount, also administered by the Jordanian Wakf. One wonders if the Jordanian authorities were intending to turn a blind eye to busloads of arriving Israeli tourists had the story not been broken by a Turkish news agency. Report in the Jerusalem Post. 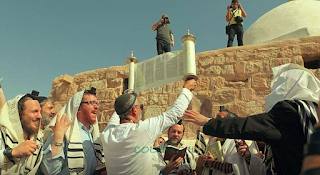 Aaron’s Tomb in Jordan was closed by the nation’s Ministry of Awqaf Islamic Affairs and Antiquities on Thursday after the “illegal entry” of Jews to the site without knowledge of the ministry, according to Arab media.
The decision to close the site was made after Israeli tourists were filmed performing “Jewish rituals” at the site, according to the Turkish Anadolu Agency. It was also decided that all visitors would have to obtain approval from the Awqaf in the Ma’an Governorate before entering.

Thursday night began the first day of the Hebrew month of Av, which is also the anniversary of Aaron’s death.
In an interview with Ynet, tour guide Roni Ayalon, who was with the group of tourists, described being subjected to humiliating treatment by Jordanian authorities.
“They just stripped down all of us,” he said. “They took off the women’s head scarves. All the boys’ yarmulkes were taken off. They took off everyone’s shirts to see if they had tzitzit (religious fringes) under their clothes and took [the tzitzit] off them. They confiscated any religious symbols they found on us.”
“If there was this kind of humiliation of an Arab on our side who wanted to enter Jerusalem and they would dare to tell him to take off his shirt or confiscate his Koran, there would be a world war,” Ayalon said. “All the Arabs would jump up. But they can do whatever they want to us."
At the Temple Mount in Jerusalem, where the Aqsa Mosque and the Dome of the Rock are located, visits by religious Jews are monitored by Wakf guards and Israeli police – and all Jewish prayer, including silent prayer, is forbidden, according to the Jerusalem Center for Public Affairs. The Wakf, an arm of the Jordanian Ministry of Sacred Properties, administers the site. No sacred Jewish objects, such as prayer books or prayer shawls, may be brought onto the mount, according to tourism website Tourist Israel.
“None of us came to make a mess,” claimed the tour guide.
“There was one boy who had a bar mitzvah and at Aaron’s Tomb we made a little celebration for him. When the policeman saw that we were singing, he quieted us and said that it’s forbidden for us to sing.”
Purported photos of Jewish tourists at the site which circulated through Jordanian media showed them praying with a Torah scroll. Read article in full
Posted by bataween at Wednesday, August 07, 2019