How did the Arabs help the Nazi war effort?

In this important 9-part series in Israel National News, historian Dr Alex Grobman examines the influence of the Mufti of Jerusalem Haj Amin al-Husseini on Arab opinion, and the Arab contribution to the Nazi war effort.  Here is an extract from Part 3, 'Enlisting Arabs for the Nazi cause':

From 1941-1945, historian Antonio J. Muñoz estimated that about 5,000 Arab and Indian Muslims volunteered to serve in the German armed forces, hardly sufficient to constitute an army of liberation. Their worth as a military force was negligible compared with units created with Muslims in the Balkans and the USSR. Though the Germans failed to conquer the region, the units did have propaganda value which the Nazis exploited.

Joseph Schechtman credited the mufti in helping establish espionage networks to provide information about British troop movements. His news transmissions to the Middle East reported acts of sabotage that would normally have been censored. His agents, who infiltrated the Middle East by land or by air, cut pipe and telephone lines in Palestine and Transjordan and destroyed bridges and railways in Iraq.

His agents, who infiltrated the Middle East by land or by air, cut pipe and telephone lines in Palestine and Transjordan and destroyed bridges and railways in Iraq. 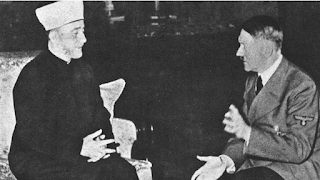 He also organized an Axis-Arab Legion known as the Arabisches Freiheitskorps that wore German uniforms with “Free Arabia” patches Schechtman said. As part of the German Army, the unit guarded communications facilities in Macedonia and hunted down American and British paratroopers who jumped into Yugoslavia and were hiding among the local population. The legion also fought on the Russian front. Another major success was el-Husseini’s recruitment of tens of thousands of Balkan Muslims into the Wehrmacht.  Moshe Shertok (Sharett), chief of the political department of the Jewish Agency, reported that on a visit to Bosnia in 1943, the mufti appealed to local Muslims to join the Moslem Waffen-SS Units and met with the units that were already operational.
In addition, Middle East expert Robert Satloff said Haj Amin used his contacts with Muslim leaders in North Africa to urge them to obstruct the Allied advance in every way possible. After Allied troops invaded North Africa in November 1942, Vichy officers in Tunisia established the Phalange Africaine, also called the Légion des Volontaires Française de Tunisie. There were 400 men in the unit, approximately one-third Arab and the rest a mélange of European pro-Fascists. The German Army assumed command of the Phalange in February 1943, fighting the British and the Free French for most of 1944. In 1944, a French military court convicted the unit’s commander, Pierre Simon Cristofini, of treason and executed him.

A second all-Arab unit under German command, known as the Brigade Nord Africaine, Satloff noted was established by Mohamed el-Maadi, a former French officer and antisemite whose nickname was “SS Mohamed.” They fought the partisans, a group of resistance fighters, in the Dordogne region in South-West France.

In March 1944, Schechtman said the mufti urged the Arabs to “Kill the Jews wherever you find them. This pleases God, history and religion.” In keeping with this religious imperative, historian Raul Hilberg said the mufti asked the German Foreign Minister on May 13, 1943 “to do his utmost” to prohibit further departures of Jews from Romania, Bulgaria and Hungary to Palestine.

The Arabs who fought with the Jews against the Nazis:
Posted by bataween at Thursday, August 22, 2019

I think that Balkan Muslims were more likely to have been recruited into the SS. There was a Handschar SS division of Bosnian Muslims and a Skanderbeg division of Kossovo Muslims, as far as I know. The Handschar collaborated with the Croatian nazi Ustashe forces.

Now this piece by Alex Grobman is good. Of course the subject of Arab-Nazi collaboration is an old one. But many many people, including those who should know, are in fact ignorant about it. So it does not hurt to go over the material over and over. Often in one account details appear that are missing from other accounts.
Also see:
The link below goes to a post with references for further reading
http://ziontruth.blogspot.com/2011/11/seventy-years-since-arab-mufti-haj-amin.html