When a group of Israeli tourists of Tunisian origin went on pilgrimage to the al-Ghriba synagogue on Djerba, the BBC amplified the claims of a Hezbollah channel that these were enemy aliens. This CAMERA/ BBC Watch report is the first of several posts on the Arabic media's tendency to distinguish between Zionist Jews and those who remain 'loyal' to their countries of birth. 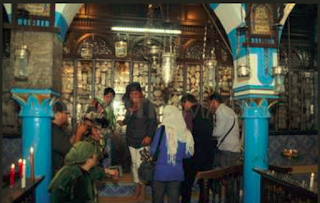 Pilgrims at the al-Ghriba synagogue on the island of Djerba

“May God bless the soldiers of Israel […] may he shed his light on us, on Israel and on Tunisia, long live Israel and long live Tunisia!”

Those spontaneous words, originally an excited mixture of Hebrew and a colloquial dialect of Arabic, were chanted by a woman on a bus full of fellow tourist-pilgrims, with many others in the group cheering and responding to her wishes with “amen”.

Most if not all of them were Jewish Israelis of Tunisian heritage. Their journey’s destination was the al-Ghriba synagogue, one of the oldest in the world, located on the Tunisian island of Djerba. Jews have been conducting an annual celebration there every Lag b‘Omer (which usually falls in May) for generations, and this year (2019) saw the number of pilgrims and visitors to the site exceeding all previous gatherings since the country underwent the Jasmine Revolution in January of 2011.

The entire trip was documented by Rina Matsliah, a well-known Israeli journalist who was born in Tunisia herself. It was her that brought a seemingly marginal moment to the public eye: the enthusiastic woman and her group were shown for a few seconds in an evening news program on Israel’s Channel 12.

The report also revealed to the viewers that the group had the opportunity to look from outside at the house near the capital Tunis where, in 1988, Israel had assassinated Yasser Arafat’s deputy, Khalil al-Wazir (a.k.a Abu Jihad) – one of Fatah’s leading terrorists and a man responsible for the murders of dozens of Israeli civilians.

That documentation of a group of Israeli tourists proudly praising Israel and its soldiers on Tunisian soil and later looking at a site where a prominent Palestinian leader was assassinated soon sparked a scandal in the North African country.

An Arabic subtitled version of the report was promoted by Hezbollah affiliated ‘al-Mayadeen’ channel, and demonstrations and sit ins were subsequently held in front of government buildings in Tunisia.

Under the accusation of “normalization” with the “Zionist entity”, the protesters specifically demanded the removal from office of René Trabelsi – Tunisia’s minister of tourism and the first Jew ever to be appointed minister in modern Tunisian history. Trabelsi is a member of a tiny Jewish community of no more than 2,500 people.

The story was reported widely on Arabic-speaking channels, including those belonging to Western media organisations. Some quoted Arab social media without fact-checking the preposterous claims raised there. For example, a television program produced by BBC Arabic uncritically amplified outraged comments which viewed the visit as a military act.

Read article in full
Posted by bataween at Sunday, August 04, 2019