What are we to make of Massoud Hayoun?

A new book has been making waves in the US: It is called When we were Arabs. Its author, Massoud Hayoun, is Jewish. So how can a Jew be an Arab? 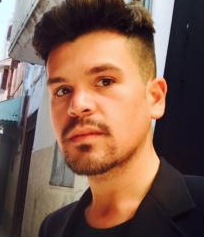 In an interview with Tsach Yoked of Haaretz, California-based Massoud (was he once Messod?) explains that his Egyptian-Tunisian grandparents loved Muslim customs. They even observed Ramadan in solidarity with their Muslim friends and colleagues. It goes without saying that they loved Egyptian films and Arabic song. Massoud, 31,  is a talented journalist and writes about this lyrically here. He also writes about the desolation of his grandfather Oscar, a refugee from Egypt, trying to eke out a living in Paris, his plight mirroring that of so many Maghrebi Muslim immigrants to France.

But does liking Arab customs or sharing their plight make you an Arab? Massoud is not the first, and won't be the last, to think an overlap of culture is more important in defining identity than political  and ethnic differences.

It is an irony that many Egyptian non-Jews refuse to be labelled as Arabs: they claim a separate Egyptian identity. While Jews could be Egyptian nationalists, they were never pan-Arabists. Pan-Arabism, as promoted by President Gamal Abdul Nasser, never made any room for religious minorities in Egypt. The pan-Arabist Nasser did more to expel Jews from Egypt - such as Massoud's own grandfather Oscar - than any other. But Arab governments do not seem to have agency in Massoud's world view.

Massoud, who has worked for Al-Jazeera, was not born or brought up in an Arab country. He has never visited Israel. Yet he has espoused an Arab narrative, in which the tragedy of the exodus of Arabs 'of the Jewish faith' is to be blamed on the twin evils of Zionism and colonialism.  The book, he frankly admits,  has a political agenda. 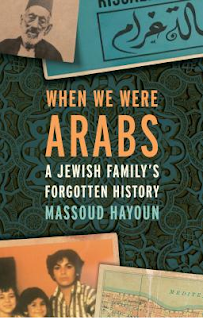 This puts him at loggerheads with his own family.  His own grandmother declared: 'I am Tunisian and I am Jewish, but I am not Arab.'

Massoud's explanation for the dissonance is that his grandmother has had her body and mind 'colonised' by the West. 'The French divided the Jews from the Arabs,' he claims. More controversially, he contends that the Armenians, Phoenicians and Amazigh, some of whom have declared their intention to overthrow the yoke of Arab domination, are also subsets of the Arab people, divided from them by colonial concepts of identity and self-determination.

It is possible to argue the opposite: that Jews were already a community divided from Muslims under the Ottoman millet system; intermarriage was rare. But there was always social pressure from the Muslim majority for Jews to convert, and for Islam to appropriate what belonged to Jews.  Massoud admits that some members of his own family converted to Islam to marry Muslims and were ostracised by the Jewish family elders. 'I feel guilty that the elders were unable to find it within themselves to continue to allow them to be part of the family,' he says.  Massoud takes it for granted that the Jewish partners in these mixed marriages should always convert to Islam,  never the other way around.

It is equally possible to argue that Arabism is a 19th century product of European nationalism - an artificial identity based on culture and language imposed on  disparate people whose loyalty is primarily to clan and tribe.  Massoud does not stop to consider this.

What drove Massoud to write When we were Arabs? Brought up in a liberal Californian atmosphere obsessed with identity politics and  anti-western, anti-orientalism, he is perhaps the Jewish equivalent of Rachel Dolezal, the white woman who spent years posing as black. She  has argued that identity is fluid and race is not binary.

Whatever his motive, Massoud could be accused of gaslighting. Most Jews would agree that they belong to a people with a unique history, culture, common language and separate identity. It is telling that to-date not a single Jewish writer or personality has seen fit to endorse When we were Arabs.  On the contrary, his book will be exploited to give respectability to an anti-Zionist narrative and blame the West for all Jewish suffering in Arab lands.

Since he worked for al-Jazeera, I wouldnt be surprised if the Qatari Ministry of Truth is behind this here.

We have heard this argument in other variations. The Soviets argued that Soviet Jews were being seduced by Zionists to come to Israel, etc., whereas they were supposedly happy in the land of Brotherhood of Nations [druzhba narodov], the Soviet Union. Yet in 1947, Egyptian and Iraqi delegates to the UN told the General Assembly that if a pro-Partition resolution were passed the Jews in those countries would be in danger. This was meant to be more a threat than a warning. And when the resolution, UN GA 181, was recommended by the UN GA, there were attacks on Jews in various Arab states and in Aden.

We have also heard that in some places, Jews were kidnapped by Zionist agents. And all this from governments that were actively persecuting Jews. Now this Hayoun fellow was likely exposed to Communist anti-Zionist propaganda in France and in California. Arab propagandists too used these arguments.

"Massoud's explanation for the dissonance is that his grandmother has had her body and mind 'colonised' by the West. 'The French divided the Jews from the Arabs,' he claims. More controversially, he contends that the Armenians, Phoenicians and Amazigh, some of whom have declared their intention to overthrow the yoke of Arab domination, are also subsets of the Arab people, divided from them by colonial concepts of identity and self-determination."

This is true nuttiness and ignorance. Even Karl Marx reported, in his journalism articles, that Muslims had a much higher social status in the Ottoman empire than non-Muslims. Massoud has had his mind colonized by the pro-Arab, pro-Muslim writers of the US foreign policy Establishemt going back to the 1940s. Think of American academics like Prof William Polk, Philip Ireland, Richard Falk, Edward Said, Juan Cole, John Mearsheimer, Stephen Walt, etc.