Insightful Times of Israel interview with Matti Friedman, the Canadian-born journalist and writer of Spies of No Country and the Aleppo Codex. Outsiders are baffled by Israelis and their politics because they apply outmoded 'European' categories to a Middle Eastern people, the continuum of Judaism in the Muslim world.

"I came from the West, with the European stories of Israel — the kibbutz, the Holocaust… The longer you’re here, the more you realize those stories don’t fully represent Israel. Half the country came from the Muslim world, and that informs everything about Israel — cuisine, behavior, music, religion, politics.

Many Israelis think the basis of the country is the European Jewish world — Herzl and Ben-Gurion — and that the Jews of the Middle East then came and joined that story. I think it’s the opposite: Israel is part of the continuum of Judaism in the Muslim world, together with the remnants of European Jewry. 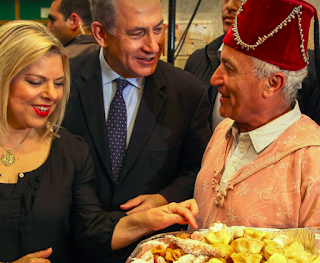 The Netanyahus at a Mimouna celebration

‘The original tenets of Zionist faith… included the communal idea of the kibbutz, the desire for a “new Jew” free of Judaism, and the belief that eventually the Arab world would make peace with the Jewish state as the world moved toward greater amity.

These were ideas from Europe, and they’re dead… In the ensuing ideological vacuum, Israel’s Middle Eastern soul has come out of the basement.

And the Jews of European origin are becoming more Mizrahi here — in their behavior, their attitude to religion. Your Israeli kids are more Middle Eastern than you if you are a Western immigrant. It’s hard to wrap our heads around that. Many people try to gauge the country through these outmoded categories: religious or secular, for instance, when most Israelis are neither; right and left — again, when most Israelis are neither.

On Judaism, we’re generally traditional. The pollsters ask: Are you religious or secular. So people try to answer. But do most Israelis light Shabbat eve candles? Yes. Believe in God? Yes. Believe in the power of prayer. Yes. That’s all very Middle Eastern. In the Middle East, people aren’t “religious” or “secular.”

More about Matti Friedman
Posted by bataween at Tuesday, July 30, 2019