He's the son of an Iraqi-Jewish mother, a fluent Hebrew speaker and now in charge of combating antisemitism, a growing problem in the US since the synagogue shootings in Pittsburg and Poway, but also on campus and in academia. 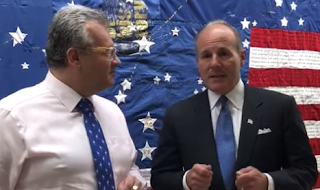 In this podcast interview with Jonny Gould at the US embassy in London, Elan Carr tells how his grandfather was arrested and dragged off to prison in leg-irons in Baghdad in 1950. Carr's mother remembers visiting him in prison. This was also a time when Iraq's Jews had a window of opportunity to leave the country. Carr's grandfather urged his family not to wait for him but to leave. They duly went to Israel via Iran. From Israel Elan's mother  moved to California.

Elan Carr tells Jonny Gould how as a major in the US armed forces he was posted to Iraq during the American invasion in 2003. It was a great thrill, he recounts, to have celebrated Hanucah in the former presidential palace. Carr lit a menorah designed and donated by Oded Halahmi, himself an Iraqi Jewish refugee. Carr led Shabbat services for the US troops, and affirms that they were never short of a minyan. 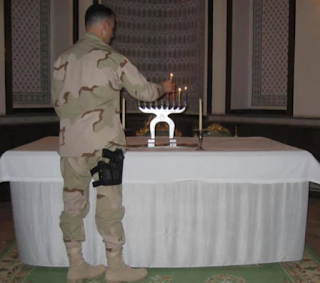 More about Elan Carr
Posted by bataween at Friday, July 19, 2019