The 1936 Directory gives a bygone snapshot of Iraqi diversity

'Religious freedom is guaranteed. Mosque stands beside Church and Synagogue.' These words, from the Iraq Directory of 1936, published yearly under the supervision of the Ministry of the Interior, sound rather hollow nowadays with the drastic decline of the Jewish and Christian population. 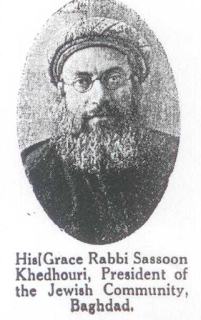 The Directory provides a snapshot of a bygone era of diversity: Mandeans, Sabeans, Bahais and Assyrians are all part of the Iraqi people. Hebrew was listed as one of the six languages of Iraq (the others were Arabic, Kurdish, Chaldean, Turkish and Armenian.) The Jewish community (the genteel term Israelite' is used) was governed by a 1931 law based on an Ottoman statute. The community , whose president was Rabbi Sassoon Khedoori, was subdivided into regional districts, each with its own hierarchy and Councils. The lay council in Baghdad, led by Yehudah Saleh Zeloof, controlled nine boys' schools and two girls' schools, synagogues, charities, and the way money was raised and spent.

It lists 41 synagogues in Baghdad. The oldest, the Great synagogue, is said to date back to the 5th century BCE and the Shaykh Ishaq synagogue to the 7th century. The rest were built in the 19th and 20th centuries.

Today five Jews live in Iraq and all the synagogues have either been destroyed or have fallen into disrepair, except for one, Meir Tweig, which is almost permanently shut.