On the 78th anniversary of the Farhud, it is beyond dispute that more and more people are aware of this brutal massacre of Iraq's Jews in June 1941, which sounded the death knell for Iraq's ancient Jewish community barely ten years later. But with increased knowledge come greater efforts to rewrite history and minimise the role of the Mufti of Jerusalem, Haj Amin al-Husseini and his pro-Nazi cohorts, in inciting the pogrom.

Haj Amin spent two years in Baghdad in the company of pro-Nazi army officers, plotting to overthrow the pro-British government. In April 1941,  they succeeded, installing the pro-Nazi Rashid al- Geylani as prime minister, until the British army defeated the Iraqi army and forced the pro-Nazi ringleaders into eventual exile in Berlin. Under the Nazi government had begun two months of toxic propaganda and anti-Jewish incitement, culminating in the Farhud.

Thomas Suarez, anti-Zionist author of 'State of Terror: How terrorism created modern Israel', has form for antisemitic revisionism. Most recently on Mondoweiss, he boasted that in 2014 he had successfully persuaded the UK Archives to declassify the first part of a two-part archive (albeit it had been redacted), labelled “Activities of the Grand Mufti of Jerusalem” and dated 1940-1941 in Britain’s National Archives in Kew. The second part, CO 733/420/19/1, 10 pages long, remains sealed until 2042, for security reasons.

The de-classified first part reveals nothing more than British anxiety at the Mufti's flirtations with the Italian fascists during 1940.

"Al-Husseini’s motivation for embracing the Axis was likely a combination of selfish political opportunism and the belief that the alignment would help safeguard against the takeover of Palestine by the Zionists. The reasoning, however grotesque, was the same used by Lehi (the ‘Stern Gang’) in its own attempted collaboration with the fascists: Britain was the obstacle both to Palestinian liberation, and to unbridled Zionism, and for both the Mufti and Lehi, defeating that obstacle meant embracing its enemies."

The Mufti's ideological antisemitism went far beyond a pragmatic alliance with the Nazis: had they won the war, the Mufti would have proceeded with his plans for exterminating all Jews in the Middle East, not just in Palestine. Moreover, Suarez equates the de facto leader of the Arab world, the Mufti, with Lehi (the Stern Gang) an extremist splinter group of terrorists in Palestine with little mainstream support. Meanwhile, under the leadership of David Ben Gurion, thousands of Palestinian Jews joined the Allied armies in order to fight the Nazis. David Raziel, an Irgun leader, had even sought to help the British by engaging in a secret mission in Iraq.

But what might Britain be trying to hide by refusing to release  in the second part of the document ?

Suarez speculates :
What could possibly be hidden in a World War II document about a long-dead Nazi sympathizer that would present such a risk to British national security eight decades later, that none of it can be revealed? At present, only the UK government censors know; but the answer may have less to do with the fascists and al-Husseini than with British misdeeds in Iraq, and less to do with Britain’s national security than with its historical embarrassment. (My emphasis).

According to Suarez, Britain was supporting regime change in Iraq all along (prefiguring the 2003 Coalition invasion) and sought a pretext for a military occupation of Iraq. The pretext could have been the Farhud, and Britain could have been behind it: a theory advanced by both the crackpot Iraqi Jew Naeim Giladi and a Lehi communique - and reason enough for Britain's 'historical embarrassment'.
It is widely recognised that the British were criminally negligent in failing to put an end swiftly to the wanton murder of Jews, rape and looting over those fateful two days in June 1941, despite the army having reached the gates of Baghdad. But to suggest that Britain had a hand in planning the Farhud seems like the height of perversion. 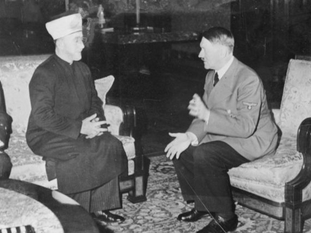 The Mufti meets Hitler in November 1941

It's a bit much to claim that the Mufti was the leader of the Arab world. He certainly presented himself in that fashion to the Nazis and one can certainly claim that he was the default founder of what became Palestinian Nationalism, having intimidated and assassinated most of this rivals. Other Arab leaders recognized him and, with the notable exception of King Abdullah, saw him as representative of the Mandate's Arab population.

That the Mufti received funding from Iraqi tax income is also a curious line item. One wonders what to make of that decision. It stands out as a unique arrangement.

Hello,
I read with interest your article on the Farhud pogrom, in which you refer to my recent article in Mondoweiss. While we certainly do have disagreements on the larger issues, there are aspects in which I think you have not accurately portrayed the Mondoweiss piece.
One core point: When you quote my “... but the answer may have less to do with...” you omit my careful emphasis (italics) on the word MAY. You put the entire quote in italics and add only your own emphasis, completely eliminating my care to say that the evidence is inconclusive, a point I repeat at the end.
Similarly, you state that “the de-classified first part [of British documents] reveals nothing more than British anxiety at the Mufti's flirtations with the Italian fascists during 1940”. Not true: the documents explicitly and repeatedly prove that the British were planning regime change months before the April 1941 coup. So, when you say that “According to Suarez, Britain was supporting regime change in Iraq all along...”, you make it sound like an opinion of mine, when I simply state what the documents state, without interpretation and without suggesting they say any more than they do (e.g., that ethnic violence was to be the method).
You continue this misreading of my text when you suggest that Naeim Giladi and the Lehi communique "are [my] reason enough" to conclude "Britain's 'historical embarrassment'." I never "conclude" any such thing, nor are Giladi and Lehi my only sources.
Giladi, by the way, was no "crackpot", but I would never accept information just because it's in his book. We can agree that his book has serious faults. In my book State of Terror, I investigated and refute one of his assertions that related to my topic.
Finally, as regards my own book, since you link only to the Collier-Hoffman "critique" of it and not to any other information about the book, here is my response to that critique, for anyone interested:
http://www.thomassuarez.com/collier_hoffman_response.html
Tom Suarez