Podcast: Why did Jewish life vanish from Arab lands?

In the week of the 78th anniversary of the 'Farhud' massacre of Iraqi Jews, prominent radio presenter Jonny Gould chose to focus his 'Jewish state' podcast on the issue of Jews from the Middle East and North Africa. You can hear his podcast interview with Lyn Julius  (38 minutes) by tuning into the following:

Lyn Julius campaigns for the culture, history and lives of the Mizrahim, the Jews of the Middle East and North Africa. Mizrahi is the Hebrew word for Easterners - and their story of life in Egypt, Iraq, Syria, Libya, Tunisia, Yemen, Morocco, Lebanon, Iran and Algeria has perhaps been overlooked in the last century. After 3,000 years of vibrant Jewish life, interspersed with persecution and exile, the Mizrahim have all but been erased from those countries. Their 3,000 year existence in Arab and North African countries all but vanished overnight. Why?

Lyn’s Iraqi parents came to England in 1950. She cofounded Harif, an organisation which promotes and represents Mizrahim. The podcast also includes Hillel Neuer and his “Where are your Jews?” speech at the UN. Gould secured his personal permission to do so as it chimed perfectly with Lyn’s message. Lyn also shares her thoughts about professor Marc Lamont Hill, who has controversially described Mizrahi Jews as an 'identity category detached from Palestinian identity'. 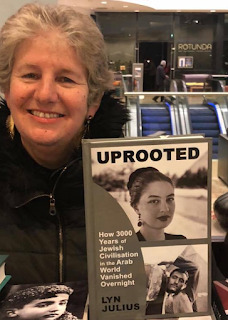