No justice for the dispossessed: a tale of two Menashes


It is well known that  Jews forced out of Arab countries lost assets and property, but it is only when you hear of individual cases that the true extent of the dispossession hits home. This is a tale of two Menashes, one in Egypt and one in Iraq, which recently came to Point of No Return's attention. The names in the Iraqi case have been changed.

Jacques Mawas is an 87-year old pensioner living in rural Sussex, England. He was expelled from Egypt in 1956 together with some 25,000 other Jews. After 1956, Jewish property was sequestrated and little, if any, compensation was forthcoming.

Jacques Mawas's family on his mother's side were the Barons de Menasce. Felix de Menasce was the president of the Alexandria Jewish community and bought land in order to build housing for Jews fleeing from Europe in the 1930s.  The Menasces owned, and still do own, land in the suburbs of Alexandria.

The  Menasce heirs instructed a lawyer to sell the land. He discovered that 700 feddans of land (1 feddan = 4200 sq. m) were still the property of the family. Some 240 feddans remained in their name as attested by official certificates from land taxes and the public registry office. The lawyer obtained final judgements from the French and British Courts of Appeal denying that the family had received compensation by the Egyptian government. But in the absence of the rightful heirs, three different Egyptian government authorities falsely claimed ownership. The family managed to obtain the annulment of these claims: some land had been sold to influential government people who pretended that they had bought the land in good faith.

"This is a massive claim which has been blocked by the Egyptian authorities, although we have the court judgements and certificates to prove it," says Jacques Mawas.  Considering the value of a square metre to be 1,000 Egyptian pounds, the compensation due to his family could amount to $100 million, he believes.

An Iraqi Jew also by the name of Menashe owned a substantial amount of land in Zafraniya (14.5 dunams: about 35,000 sq. metres), Baghdad. Like all Jews, he was forced to leave his assets behind when he escaped Iraq.  The family gave up any hope of ever seeing any compensation.

Recently, however, Menashe's daughter Charlotte was contacted out of the blue by Ahmed, an Iraqi Muslim whose grandfather was a security guard living on the land in a mud hut. Although they had never paid rent, Ahmed's family constructed brick homes on the site to accommodate their growing numbers.

But a wealthy businessman called Ali wanted to evict Ahmed and his family and sell the land, which at today's prices is very valuable.To do so, Ali falsified the deeds which were in Menashe's name and put the property in his own name.

Desperate to stop the eviction of his family, Ahmed pleaded with Charlotte to intervene so as to demonstrate that the genuine owners were Jews. But his pleas may have come too late.  The photo shows Ali's  bulldozers moving in.
. 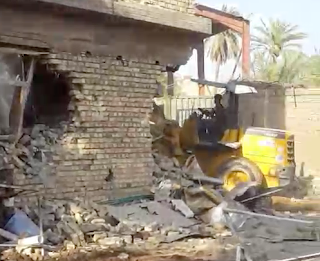 This case leaves Charlotte and her family with an opportunity.  But to engage expensive lawyers to support her family's claim may prove futile. It will only offer a slim hope of getting her father's property back. Even Jacques Mawas, whose claims were vindicated in the courts after embarking on a long legal process, seems to have no right to justice.

These cases have been duplicated across the Arab world: squatters have moved in and deeds have been falsified, often aided and abetted by powerful and well-placed individuals. The dispossession may have happened decades ago, but Jews are still haunted by the bitter ramifications.

In the short run power always supersedes Ethics. In the long run Ethics wins. But history is the lone witness.