Shalom Tesciuba, leader of Jews of Libyan descent for 50 years, has died in Rome.  He led the rebirth of the Tripoli Jewish community in Italy and helped revitalize Roman Judaism after the war, La Stampa reports. 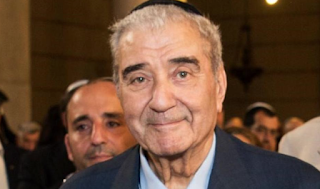 Born in Tripoli in 1934, Tesciuba escaped from the pogroms and the Arab riots against the Jews and managed to reach Italy in July of '67, during the mass exodus of the entire community. From there he immediately began to help newly-arrived refugees to integrate into the capital, and  keep alive the millennial traditions of Libyan Judaism, enriching and reviving the entire Roman Jewish community.

"Relations with the Community of Rome were very close  straight away," Tesciuba said in an interview with La Stampa -. Chief Rabbi Elio Toaff worked hard with us, and gave me carte blanche to enforce Jewish standards for everyone. " This is how Tesciuba helped Toaff to rebuild Judaism in Rome, still deeply affected and weakened by war and the Holocaust. (...)

Thanks also to its activity, the turnout in synagogues and study groups reached the highest levels in the 1980s. Thus Tesciuba transformed an old cinema into a synagogue, the Beth El, still one of the beating hearts of Jewish life in Rome.

In June 2017, together with Sion Burbea, another leader of Libyan Jews, he was given an award by the then Prime Minister Paolo Gentiloni, during the ceremony at the Tempio Maggiore di Roma marking  50 years since the arrival of the Jews of Libya in Italy.