Jews have not appropriated hummus from Arabs

Contrary to what anti-Zionists would have us believe, Hummus and pita were not Arab foods appropriated by Jews, they were mentioned in the Torah. Writing in the Times of Israel Dani Ishai Behan joins battle in the food arena:

With the “debate” over Israel’s legitimacy permeating Western campuses and media, Israeli culture has periodically oscillated in and out of the limelight. In particular, disputes over what aspects of Israeli culture – especially Israeli cuisine – are “authentically” Israeli (hint: if it’s Middle Eastern, then it’s “obviously not Israeli”) have become one of the most contentious frontiers of the entire anti-Zionist war on Jewish rights. 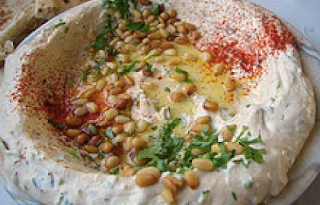 Attendant to the narrative that Zionist returnees in Israel/Palestine are “settler colonists” who “stole” Arab land, anti-Semites similarly charge Israelis and diaspora Jews alike with “stealing” Arab culture in the hope of weaving a convincing tale of Jewish indigeneity out of whole cloth. It is a fictive that aims to dispossess Jews of their own cultural heritage, identity, peoplehood and, eventually, their land.

There is easily a one-to-one mapping between the three Arabic and three Hebrew consonants that spell the word. I don't quite see how the vowels would map; and it looks like the Arabic has a geminate (doubling) marker on the fully vocalized version. Interestingly the speculation has been kicking around awhile.
--- malca
حُمُّص
‎https://en.wikipedia.org/wiki/Hummus

https://humus101.com/EN/2006/10/10/6/ ב חמץ
(2006)
A theory, widely attributed to Meir Shalev (as Dr. Dafna Hirsh had commented, the writer and journalist Menahem Kapeliuk thought of it first), claims that hummus was first mentioned in the old testament.
Hometz

There is one thing really good about appropriated hebrews calling themselves jews: vivid imagination.