Further to our post flagging a Jewish Chronicle article on the difficulties that Jewish refugees from Aden are encountering in renewing their British passports, more refugees have come forward to voice their frustration. 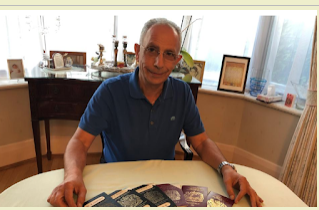 When the UK government does renew passports, it states as 'Yemen' the holder's birthplace. Aden ceased to be a British protectorate in 1967.

When Sammy David's father tried to renew his British passport, Sammy had to produce up to 50 documents to satisfy the UK Home office. The process took years. When his father finally received his passport, his place of birth was said to be 'Yemen' and not 'Aden'. It took more correspondence pointing out the family's important role in the colony before the UK government agreed to change his place of birth back to Aden.

However, Sammy's uncle has a passport stating 'Yemen' as his birthplace. The two brothers  do not travel together in order to avoid having to answer awkward questions.

Sammy David's great-uncle got so frustrated with the process that he gave up his British nationality and took out US nationality.

There have been other similar cases. 'Aden' does not come up as an option if renewing one's passport online.

It is hard to estimate when Jews from Aden first began to experience difficulties in renewing their passports. According to Sammy David, it could be as long  ago as ten years.
Posted by bataween at Sunday, June 16, 2019

onlinepassportapply said...
This comment has been removed by a blog administrator.
1:05 pm, July 17, 2019