History books  tell us about major events as they happen. They fail to tell us the specific stories of individuals who suffer  as a result of those events. Many remain unrecorded, and are eventually forgotten. However, Iraq-born Sami Sourani has made sure to record this story for Point of No Return. Every word is true, although names have been changed. 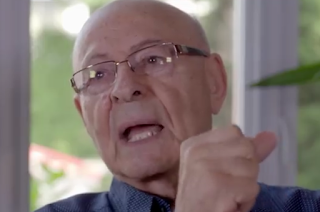 The following is a true story: it happened in Baghdad after the establishment of the State of Israel. Jews in Arab countries, especially in Iraq, had a very hard time at the hands of the Iraqi government. Eventually, the Jews had to leave Iraq, bringing an end to a Diaspora that had lasted about 2,600 years.

This is a story about two men, one Jewish ( let us give him a name: Yusef) and the other Muslim  (let us call  him Hamid). They were partners in cultivating fruit orchards located by the Tigris river not very far from Baghdad. Both partners inherited this land from their ancestors who owned it for many generations.

For many years, the partners divided their profit in a way called “share cropping”. This means that they shared all costs involved - such as the cost of irrigation, fertilizers, seasonal workers, etc. Then they divided the crop equally: for example, one ton of oranges for this partner and one ton for the second partner. The produce was then delivered to the fruit market n Baghdad and sold by public auction.

Over the years, the two partners became very friendly. Hamid called Yusef, “my brother” and had  great respect for him. At the end of Jewish holidays, Hamid used to send to Yusuf’s house a big tray of fresh Iraqi pita, vegetables, fruits of the season and yogurt. When Hamid was sick, Yusef took him to the best Jewish doctors in Baghdad and took care of all his needs. He also looked after Hamid ‘s wife when she was seriously ill. On her death bed, she told her husband,” Take care of Yusef and do not betray him. He is more faithful to you than your brothers of your own flesh and blood”. Hamid replied, ”Yusef is my brother: I shall always protect him.”

In the 1950s, as the situation of the Jews became intolerable, Yusef’s  family escaped Baghdad  for Israel illegally. Yusef stayed in Baghdad hoping that he could sell his property and join his family soon.

It happened that Hamid had a son who finished high school and wanted to study further. Hamid did not like his son’s idea: he wanted his son to be a farmer like himself. Yusef convinced Hamid to let his son further his education. The son went to study at a university,  but at the end of the year he failed.  While  a student, he was  swept up in a fanatical  Muslim movement. He returned home and  tried to convince his father to tell the Iraqi authorities that Yusef  was a Zionist. This way, Yusef would be put in jail and his father  would benefit from the whole land, not just half of it. Some Muslim friends who overheard that scenario between  father and  son, came to Yusef telling him that his freedom was in danger. Yusef smiled, saying, 'Hamid is my brother -  he will never betray me'. A few days later, Yusef was arrested. He was taken for interrogation and jailed. For five years, Yusef was in and out of prison in Baghdad for interrogation and torture. As a result of the torture, he could not sleep on his back for the rest of his life.

There  were  still some good people in this world, Jews and Muslims, who knew Yusef. They tried to bribe the authorities to let him out of jail. The Iraqi government took possession of all his property. He was given a one-way permit to leave Iraq. He had to sign a document  to say that he was giving up his birthright,  assets, and that he would be persecuted for any attempt to come back to Iraq. He had no other choice but to accept this condition. His friends got him some clothes and  food and drove him to Iraq's international airport where he boarded a plane to Beirut, Lebanon and from there to Cyprus. He was allowed by the Iraqi authorities to take with him only five Iraqi dinars . 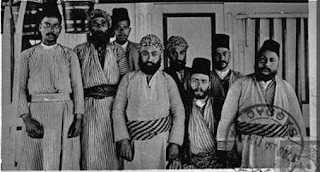 At the airport in Cyprus, custom officers opened his suitcase as they did for all passengers. They were surprised to find that it contained no clothes, only garbage and scraps of old newspapers. It seems that the Iraqi prison guards who inspected his suitcase before he left had taken his clothes and replaced them with garbage.

In Cyprus, an Israeli agent arranged his flight to Tel Aviv. Yusef was re-united with his family in Tel Aviv, after five years. He was overwhelmed. He cried, saying that the Iraqi government had taken away all his assets and he had come empty-handed, with only five Iraqi dinars in his pocket.

It is very hard to accept defeat. The situation  had been imposed on him. His confidence and willpower  were gone. He was a mental and physical wreck. The family tried to calm him down: the main thing was that he was  alive. A few days later, he realized that there was no other choice but to accept his situation. Like many Iraqi businessmen who lost their property, he went to work as a laborer in construction, thanking Hashem that he was alive. Friends who knew him from Baghdad could not believe that he had lost his assets. It was hard for him to speak about his situation and how he had suffered at the hands of the Iraqi prison guards.

A few years later, Yusef and his family decided to leave for Canada. A week before leaving Israel, an elderly close relative of the family arrived  in Israel.  Because of his  advanced age, that person had been allowed to leave Iraq.  He had tried very hard to reach Yusef: he had a message for him  from Hamid, his Muslim partner. Yusef was anxious to hear it. ” My dear brother Yusef, I am sending you those words and I am on my death bed, dying of cancer," Hamid 's message said. " I do not know how many days I have left in this world. I lost all the money I took from you, and I have nothing to pay you back. I can feel how hard life was for you and for your children, I left you penniless. My final request from you is just to send me a piece of paper saying that you forgive me for the hardship I caused you and your family. I want to stand before God and confess my sins, as long as you agree to forgive me. This is my last wish, dear brother. Please forgive me.”

When Yusef heard those words, he cried like a child. He said that they were like brothers in one family. "We respected each other, but it seems that he was motivated by greed to do what he did to me. "

Yusef's children were very surprised that their father still felt pity for his partner. They told their father that they had had a hard time, until they had managed to study and stand on their feet. It was not easy to accept defeat and it is also very hard to stand  up to  the challenges of life when you are penniless, and all  you have is blind ambition. Yusef said that mistakes could happen in many families and that life was simply give-and-take. We had to learn to forgive  and forget. This is the only way to live in peace and harmony.

Upon arrival in  Canada, Yusef  wrote a letter to Hamid. He did not tell his family the contents of the letter. Yusef waited patiently for a reply from his partner, but no reply was ever received.
This episode or similar ones could have happened to many Jewish families, but they were kept unrecorded and eventually forgotten. However, many questions rise to the surface. Are there Iraqi Muslims who feel sorry for what was done to the Jews of Iraq, a country which made them leave after 2,600 years? Will there come a day when Jews and Muslims may live together under one roof,  working together to build the Middle East? At present this seems a mirage. Yet miracles can happen!
Let us pray for miracles.