The Deputy Chair of the New South Wales Parliamentary Friends of Israel, Walt Secord, has spoken in the NSW parliament, Australia,  about the Sydney Sephardi Jewish community’s commemoration of the Farhud on 2 June. During the commemoration,  pubished poet Yvonne Green read out the poem she  was commissioned to write on the 75th anniversary of the pogrom (41 mins into the video), in which at least 179 Jews lost their lives. In 2020 the Sydney Jewish Museum will stage an exhibition on Jews from Arab lands (with thanks: Vernon, Yvonne): 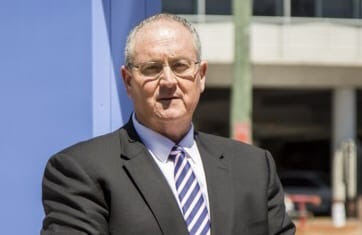 Here is Walt Secord's address, as reported by J-Wire:

"It is part of a welcome development in recent years to mark significant events involving the Sephardi and Mizrachi community and their history.

In 2015 the NSW Jewish Board of Deputies and the Sephardi community marked Farhud jointly for the first time and in 2020 the Sydney Jewish Museum is planning an exhibition on Jews from Arab lands.

While I have some knowledge of the Sephardi community, which stretches back to the 1980s when I was a journalist at The Australian Jewish News and my visits to Israel, I concede that I am more familiar with the Shoah and the destruction of European Jewry. However, I have become increasingly aware of the horrific events of 1941 and the expulsion of the Jewish community from Arab lands after the establishment of the State of Israel.

The Farhud was a pogrom in Iraq in 1 and 2 June 1941 and the phrase was coined by the Iraqi Kurdish population. It means “violent dispossession”, referring to the attacks on the Jewish community in Baghdad. Conservative estimates put the number of those murdered around 178, including 142 in Baghdad alone in the pogrom. Looting of Jewish property took place; 900 Jewish homes were destroyed and there were also rapes. A synagogue was invaded and its Torahs burned. Afraid to give the dead a proper burial, the corpses were buried in a mass grave.

The Farhud was an extraordinary development in the history of Iraq as there has been a Jewish presence there for more than 2,600 years, dating back to the destruction of the first temple in 586 BCE. At the beginning of the twentieth century, the Jewish population of Iraq was estimated to be around 250,000, although it had decreased to 150,000 by the middle of the century.

From 1950 to 1952 up to 130,000 Jews were airlifted out of Iraq to Israel. They faced much discrimination, persecution and anti-Semitism after the establishment of the State of Israel and most were forced to flee from Iraq. The Sydney commemoration was a solemn and dignified affair.

One of the other highlights was chatting and meeting the award-winning British-Bukharan Jewish poet, translator and barrister, Yvonne Green, who read from her work, The Farhud. The poem was commissioned for the seventy-fifth anniversary of the Farhud and was recited in the Israeli Knesset when it commemorated it.

Finally, I look forward to accepting the invitation from Mr Shaul Meir Ezekiel to visit the Sephardi Synagogue at Bondi Junction in the near future. I thank the House for its consideration."


Yvonne's journey to celebrate the power of poetry (Plus 61)


Articles in the Hebrew and Arabic Press:

The third generation battles to preserve the memory of the Farhud (Makor Rishon : with thanks, Yoel)