A month after his grandmother’s death, Jeremie Dres was forced to put his grandfather into a retirement home. It was then that the comic book author and multimedia artist realised how urgent it was to record his maternal grandparents’ story. This nostalgic foray into Egypt's past says nothing about the antisemitism which drove Dres's family out - not surprisingly, as Middle East Eye is  a Muslim Brotherhood publication. (With thanks: Lily)

Dres, who is based in Paris, headed off on a two-week trip to Egypt, retracing the trail of his grandparents, both of whom were Jews born in Alexandria. “I’d already tried my hand at the family history genre, with We Won’t See Auschwitz,” he says of his previous work, in which he and his brother try to understand what it means to be Jewish and Polish. 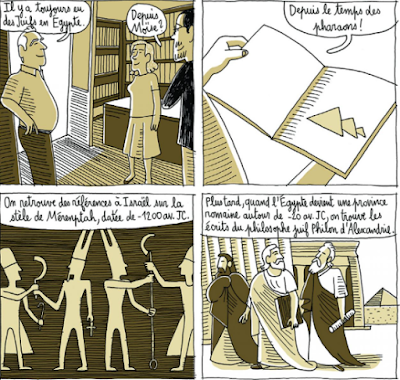 “My grandparents had always been a link for me to the world at large. When they died, I realised the link was going to disappear with them, and I was afraid my roots would too." His efforts to safeguard his family heritage led to Remembering Alexandria, a compelling graphic novel that captures the heyday of Egypt’s cosmopolitan past.

But what began as an investigation into resurrecting and preserving his family history led him to uncover the forgotten heritage of the Jewish community in Egypt – and sent him on a remarkable adventure, leading to encounters with a number of emblematic figures. When he reached Cairo, Dres immediately met the few remaining representatives of Egypt’s Jewish community, including Magda Haroun, a lawyer (incorrect - ed) and community leader based in the Egyptian capital, and Amir Ramses, a film-maker whose works include a documentary on the last Jews of the country. “I wanted to meet them because they could all tell the story of a bygone era,” he says.

“And yet today, these people, who are part of the history of Egypt, are regrettably seen as objects of fascination.” Cairo’s Jewish community has now dwindled to less than a dozen people, yet it possesses a collection of unique cultural artefacts that its remaining members are determined to preserve.

Remembering Alexandria tells of how Jewish non-profit groups around the world are fighting over the pieces: while some believe the relics should remain in Egypt, others say they should be entrusted to the countries where their rightful heirs now live.

Read article in full
Posted by bataween at Monday, June 17, 2019