Bahrain:'Israel is here to stay, we want peace with it'

Bahrain's foreign minister sees the US-led economic workshop taking place in Manama this week as a possible “gamechanger” tantamount in its scope to the 1978 Camp David peace agreement between Israel and Egypt, the Gulf state’s foreign minister  has said. Report in the Times of Israel (with thanks: Lily):

“We see it as very, very important,” Khalid bin Ahmed Al Khalifa told The Times of Israel on the sidelines of the “Peace to Prosperity” workshop. 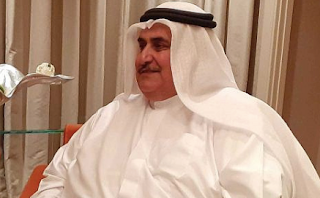 Khalifa also stressed that his country recognizes Israel’s right to exist, knows that it is “there to stay,” and wants peace with it. He said the US-organized conference here, which is focused on the economic aspects of the Trump administration’s Israeli-Palestinian peace plan, could be like Egyptian president Anwar Sadat’s visit to Jerusalem in 1977, which helped pave the way to the Camp David Accords and the normalizing of relations between Egypt and Israel.

“As much as Camp David 1 was a major gamechanger, after the visit of President Sadat — if this succeeds, and we build on it, and it attracts attention and momentum, this would be the second gamechanger,” Khalifa said. In an interview in his suite at Manama’s posh Four Seasons hotel, Khalifa did not commit to normalizing diplomatic ties with Israel in the near future, but unequivocally affirmed Israel’s right to exist as a state with secure borders.


While Bahrain might be only Arab state, besides Egypt and Jordan, to publicly acknowledge Israel’s right to exist, “we know our brothers in the region do believe in it” as well, he said. Khalifa pointed to the Arab Peace Initiative as the blueprint for normalizing ties with Israel. Israel’s rejection of the plan is a “missed opportunity,” he lamented, but Jerusalem can always rethink its position.

Read article in full
Posted by bataween at Thursday, June 27, 2019