Bahrain synagogue comes back to life

The Bahrain synagogue, which is seldom used, came back to life briefly when a shabbat service was held for delegates at the Bahrain peace summit. The service was organised by Times of Israel Raphael Ahren, together with former Ambassador to the US Huda Nonoo. Donald Trump's Middle East adviser Jason Greenblat, Rabbis Marvin Hier and Marc Schneider, with senior editors and Israeli reporters, made sure there was more than a minyan (quorum of ten men) (with thanks: Lily): 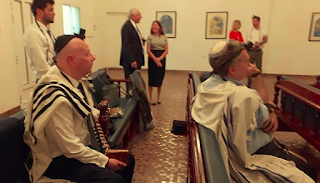 MANAMA, Bahrain — Businessmen, reporters, five rabbis and a senior White House official held rare morning prayers at the only officially declared synagogue in the Gulf Wednesday, on the edges of a peace conference being held in the tiny gulf kingdom that was once home to a thriving Jewish community.

At the end of the service, which took place on the sidelines of the US administration’s economic peace workshop held in Bahraini capital Manama, the men, clad in prayer shawls and phylacteries, broke out in song, walking around the bimah and singing “Am Yisrael Chai” — the people of Israel live.'

Read article in full
Posted by bataween at Wednesday, June 26, 2019