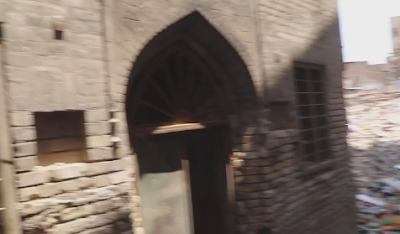 The remains of the tomb of Sheikh Ishaq Gaon in Baghdad

Two young boys guide a visitor to the  site of the tomb of a Jewish  holy  man in Baghdad, the shrine of Shaykh Ishaq Gaon (around 4 mins into the video by Falah Hasan and Dhikra Sarsam).  The tomb is now a semi-ruin, surrounded by rubble and rubbish.

According to Zvi Yehuda's book Tombs of Saints and Synagogues in Babylonia, Shaykh Ishaq Gaon was the sarraf, the chief treasurer of the Caliph Ali b Abi Talib. Shaykh Ishaq Gaon died in the year 688 CE and was buried in today's Hannun neighbourhood inside the old Jewish quarter in Al-Rusafa in east Baghdad. Muslims call him Sheikh Ishaq, Ali's treasurer.

The burial place of Shaykh Ishaq Gaon also served as a synagogue populated by 'ten idle men' supported by the Baghdad Jewish community. The tomb was in Jewish hands until the exodus, when it fell into disrepair.
Posted by bataween at Thursday, June 20, 2019